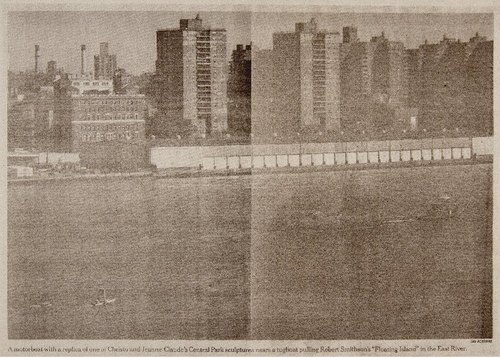 In 2005, designer Ian Adelman and his colleagues spotted The Gate chasing Robert Smithson’s posthumously realized Floating Island. Adelman snapped a photo, which ended up on the front page of the New York Times. It was only revealed some years later, after several arch, art world stunts established their reputation, that the pseudonymous collective Bruce High Quality Foundation acknowledged The Gate had been their inaugural project. Meanwhile, they have developed an irreverent, thoughtful, often amusing practice that remained admirably critical of the market fetishization of authorship, originality and young talent.
Until now, I guess, when they printed a big-ass version of Adelman’s photo as it ran in the Times onto a canvas and put it into a “selling exhibition” at Sotheby’s “curated by Vito Schnabel.”
Looks pretty sexy. I hope it’s an edition, so they can give Adelman an A/P.
The Gate: signed and dated 2011 on the overlap
silkscreen and acrylic on canvas
47 1/2 x 67 1/2 in. [sothebys.com]
2005: Water Gate
2009: Things we did not know in 2009: BHQF did The Gate
2009, a week later: Never Mind! Bruce High Quality Foundation made The Gate, but not The Article