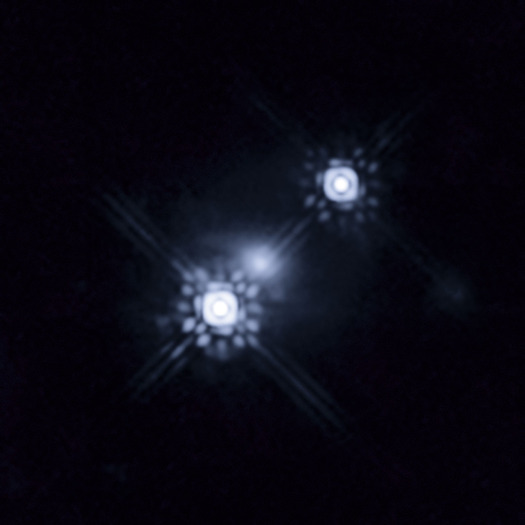 i love that the headline on this story, “Hubble Directly Observes The Disk Around A Black Hole,” has to be followed immediately by, “but it’s not that disk.”
The spectacular patterns and rays in the photo above of the double quasar known as HE 1104-1805 are apparently imaging artifacts from the Hubble Space Telescope, They’re caused by the circular aperture and the structural elements of the telescope itself.
Meanwhile, the accretion disk is only visible at all because HE 1104-1805 is subject to gravitational lensing, distortions in the light caused by the gravitational pull of an intervening galaxy.
I can’t quite articulate it yet, but there’s something here about the appeal and limits of opticality; the utility and limitations of the narrow, visible part of the spectrum; and the documentation and characterization of distortion that I find very interesting. And then there’s the inextricable relationship between the instrument and its object; which then collapses as the universe itself–the galaxy-as-lens–becomes the instrument for viewing itself.
Hubble Directly Observes the Disc Around a Black Hole [spacetelescope.org, via]
What’s That Strange Disk Around That Black Hole? [discovery.com]