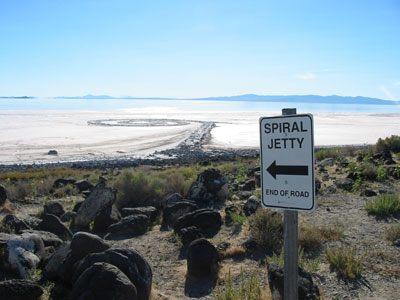 I’ve kept quiet and hopeful for six months, but now I think it’s time to congratulate Dia Foundation, the Utah Department of Natural Resources, the Utah Museum of Fine Arts, and the Great Salt Lake Institute at Westminster College on the renewal of Dia’s lease for the Spiral Jetty site; and on the newly announced, three-way collaboration managing stewardship of the artwork. I think it’s fantastic, reassuring for those who know and care about Smithson’s work already, and encouraging for the many people in Utah and beyond who will discover it going forward.
When I founded The Jetty Foundation in Salt Lake last summer and submitted an application to DNR to lease the state land under Spiral Jetty, I proposed a similar partnership, where local stakeholders would support Dia’s stewardship of the work by engaging on the crucial environmental, development, educational, and political issues that impact the Jetty. The Foundation also very explicitly affirmed the importance of Dia’s undisputed role as owner of the artwork and the designated steward of Smithson’s estate.
I don’t mean to claim any credit for creating the solution that DNR developed in its negotiations with Dia. On the contrary, I think the concept of local institutional engagement on the Jetty’s behalf has been gaining traction in Utah in the years years since the artwork re-emerged. If the Foundation’s proposal encouraged Utahns’ vision for a stronger, more engaged future for the Jetty, then the weeks I spent basically lobbying with local politicians, government officials, and other community leaders was well worth it.

Sheesh, I still feel so nervous, so cagey, so official, wary of adding uncertainty or controversy to an unexpectedly uncertain situation. Some folks I’ve talked to–and no doubt some folks I’ve very carefully not talked to–wonder what the point was, why meddle with Dia’s deal?
The shortest answer is the one I gave last summer, which is that for a very hairy few weeks, the Jetty’s future looked highly uncertain at best, and under direct threat at worst. It was not at all clear until after I’d filed the application, and met with officials at DNR, and had Dick Bueller, the official charged with determining the fate of the site lease, quote Smithson’s own words to me, that I was reassured the artwork was not in existential danger. If there’s any single person who deserves credit for Spiral Jetty‘s well-being, it is Mr. Bueller, who takes the work’s stewardship incredibly seriously.
In the process of meeting with DNR and other folks and talking about the Jetty and its significance, I really came to see the lease expiration and renewal process as an integral part of Spiral Jetty itself. Smithson envisioned the Jetty as existing and operating on a geologic time scale. In addition to the cyclical changes of the seasons and the lake level, and the entropic natural forces of erosion, Smithson linked the Jetty to the prehistoric transformations that created Great Salt Lake itself–and the tar-like oil underneath it. The derelict 1920s oil wells at Rozel Point showed that humanity, too, was subject to entropy and failure.
By siting Spiral Jetty on leased state land, Smithson put in place a checking mechanism, an alarm that goes off every twenty years–or now 10–which gives people the chance to assess the Jetty and their relationship to it. Counting Smithson’s original lease signing, then, this was the third tick of Spiral Jetty‘s geologic clock.
Which made me wonder what had happened before. So last summer, I began investigating the history of the Spiral Jetty site and its lease, and Rozel Point and Great Salt Lake. And we have come a long way, baby.
The first thing I noticed when I was studying the original 20-year lease Smithson signed in 1970 and the second 20-year lease Nancy Holt signed in 1991 should be immediately evident, but somehow wasn’t: this had happened before. The lease expired, and it was almost a year before a new lease was signed. Now that the lease’s fate is settled for another ten years, I think I can ask Nancy what that process was like.
The other thing that I’d wondered was why ten acres? Would it be possible to expand Spiral Jetty‘s buffer zone by acquiring adjacent leases? What is their status, anyway? I was surprised to find out that in the decade before Smithson built it, and from the mid-1970s into the 1980s, there was active leasing, testing and drilling going on around and even rightnextto the Jetty.
And there was no sign that the Jetty factored into any leasing, land, or lake decisions at all. With Smithson’s death and the rise of the lake level, it’s as if Spiral Jetty had really disappeared. In 1980, Dr. J Wallace Gwynn edited Great Salt Lake: A Scientific, Historical and Economic Overview for the Utah Geological and Mineral Survey at DNR. The 400-page what seems to be the first definitive, official history of the lake. There are a couple of references to Rozel Point’s oil structures, but no mention of Spiral Jetty.
And so I compare the situation of the first lease, and the buildup to its expiration and the first renewal, to 2011, where tens of thousands of people in and out of Utah have visited the Jetty; where the possibility of test drilling several miles off Rozel Point causes an international furor; and where one of the top officials at DNR quotes Smithson from memory. Where Smithson’s artwork and its site were once on the farthest, remotest edge of culture, now they have moved, if not to the center, then at least towards it.
[note: I expect I will wrap up The Jetty Foundation soon, but set up the website as an archive of lease documents and the historical materials I’ve collected about Rozel Point. I don’t yet know what I will do with my remaining tote bags.]
UMFA, Dia Art Foundation, and Great Salt Lake Institute Collaborate to Ensure Long-Term Preservation of Spiral Jetty [umfa.utah.edu/spiraljettystewardship]
The Future of Spiral Jetty: Community and Collaboration, Feb. 2, 2012 [slcpl.lib.ut.us]
Previously: Site Specifics: Why I’m Bidding on the Lease for the Spiral Jetty site