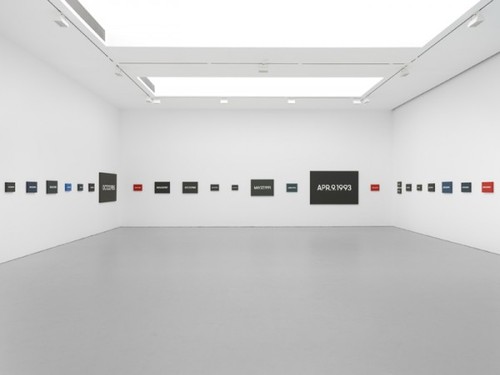 I don’t think Hirst’s assistants would agree that spots aren’t about time, but Karen Rosenberg’s line in her On Kawara review is nice:

Speaking broadly, you could say that one is about time and the other is about money. (Though, as the adage goes, the two aren’t all that different.)

Also, I just wanted to post something short for a change.
I also disagree with her kicker, or feel the opposite, rather:

But it’s hard to come away from this show without confronting the existentialism — and fear — behind these one-day-at-a-time paintings. They remain powerfully connected to Mr. Kawara’s other well-known body of work, a series of telegrams sent to his dealer that bore the message “I am still alive.” One never worries, with Mr. Kawara, that the art will expire before he does.

On the one hand, the end of Kawara’s art is exactly what concerns me, especially this week when artists old and too-young have died. Part of me wants Kawara’s Today Series to continue after his death. Why can’t someone take it up seamlessly, invisibly, anonymously? Why couldn’t a collective or collaborative step right into his shoes without missing a beat?
Didn’t Christina Ruiz suggest exactly that for the supposedly endless Spot paintings?

After all, [Hirst] could easily approve the method of production for posthumous spot making so that his heirs can continue to make them until the end of recorded time.

The end of recorded time sure sounds like Kawara territory to me.
I mean, I guess some people know, but what if it turns out Kawara had actually died in like 1985?
Also, I can’t believe I didn’t make the connection sooner–not that there is one, but why can’t there be?–but I’ve had Jonathan Coulton’s song from the end credits of Portal stuck in my head for a couple of weeks now. I’m singing it right now, in fact.

On Kawara Date Paintings in New York and 136 Other Cities, through Feb. 11 [davidzwirner.com]