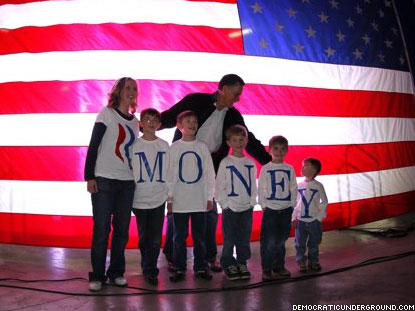 R-M-O Oh my heck! N-E-Y
This awesomely remixed version of this AP photo [by Gerald Herbert, below] from a campaign event in Elko, Nevada last Friday makes me marvel at the many lost opportunities for Sforzian hacks in the past. 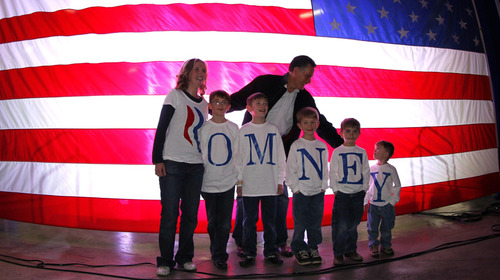 I mean, why should wire service photographers have all the fun? But then I read all the way through the Democratic Underground forum thread where the Photoshopped version first appeared, and where dozens of armchair politicos oneupped each other with their media acumen:

Mark D.
63. Romney is an anagram for R Money
As this photo made me realize that.
Tweet what I’d said-go viral with it.
JI7
43. a quick or even long Glance still looks like “money”
if i was adivising them and saw this i would have recommended against it.
illinoismike
59. Something else
What bothers me more about this picture is that all the participants are male and white. That doesn’t seem to bother Mitt at all!
silverweb
3. Is that real?
Ohhhh, please-please-please-please let it be real so we can bury him with it!!!
MrScorpio
74. R. Money, Mitt’s new rap name. nt
SemperEadem
19. :: very slow golf clap ::
you couldn’t make this shit up.
“r” “money” our money… yep.. can’t make this shit up.
[barrage of slow clap animated gifs deleted] 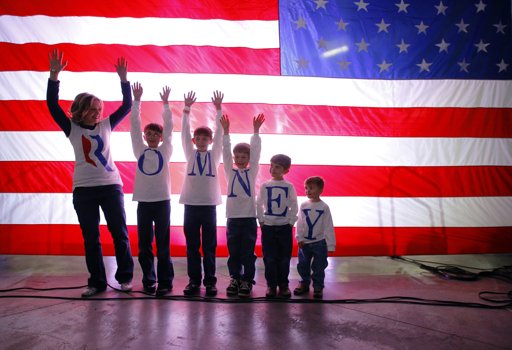 And then while trying to find the source info for the original photo, I came across Bryan Snyder’s shot for Reuters of the Fisher family waiting to meet The Man behind the curtain, and doing the wave or something. 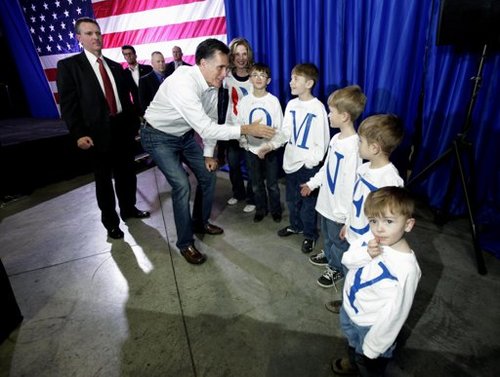 And then there was another shot, by another AP photographer, Ted Warren, of the Fishers meeting Romney again. Or for the first time. This is from the front of the flag, where the Fishers had been waiting from the get go–and photographing themselves. And being photographed by Warren in turn. 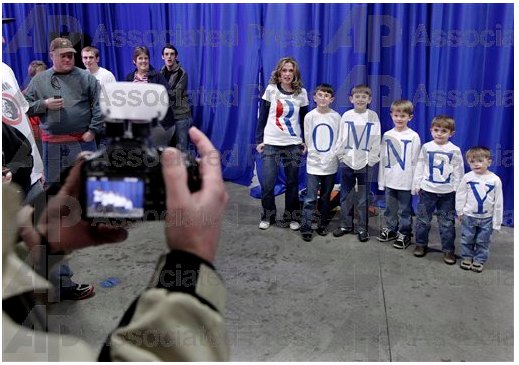 And so somewhere in between these photos, after the event, Mitt put his bomber jacket on, the Fishers got invited backstage, and they got a private [sic] photo-op. 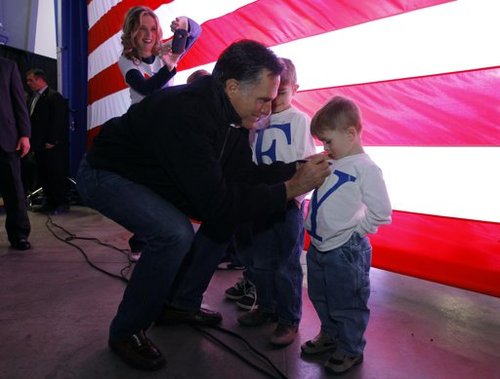 Y? Because we like you!
And then Snyder–and Proud Mom–both snapped a photo of Romney autographing the shirt of the most disinterested little Fisher of them all. Actually, look at “E”; his shirt’s signed, too. 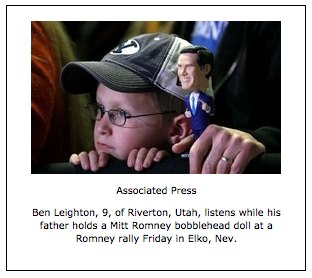 And then there’s the kid whose dad–given the BYU hat, I’m gonna guess he’s a supporter–drove two hours to the event with a Romney bobblehead [above]. And the shot of Mitt reflected in a thickset supporter’s aviator glasses, and the soft focus cowboy hats in the foreground signalling The West. 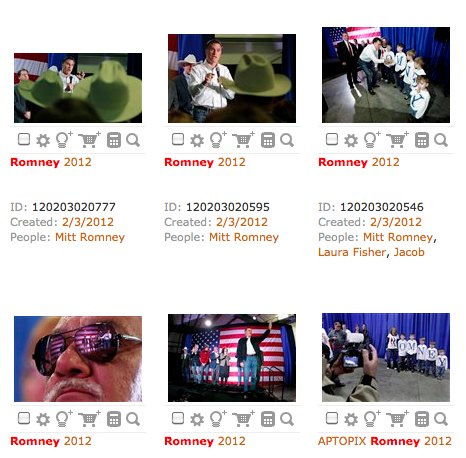 via apimages.com
And I realized all these images exist on a hacking continuum between real and faked, homebrewed and happenstance. Whether it’s the inkjetting family, the pack of weary photojournalists, the local handlers, or the messageboard trolls, people are just trying to do the best with what they’re given. Given all the stars that have to align, and all the fingers in the pie, I guess we should be lucky to get any shots at all.
Pic of the moment [democraticunderground.com via @akaczynski]
Everything else from AP & Reuters via Yahoo News.