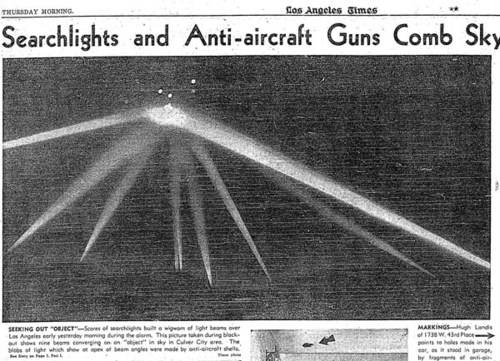 image of the front page of the Feb. 26, 1942 LA Times, via framework.latimes.com
Back in 2007, this blog experienced a notable conceptual shift, when I found myself writing about things, works of art, I guess, that I wanted to exist, not those that actually existed.
An early example: a historically accurate re-enactment of the “wigwam” of searchlights photographed by the LA Times on the night of Feb. 23, 1942, the infamously hapless false alarm/gun battle/freakout known as the Battle of Los Angeles.
Researching along those searchlight lines led to the discovery of other awesome but implausible subjects for artistic reincarnation, such as the fantastical “dazzle lights” camo apparatus of legendary British camo officer/magician/bullshitter Jasper Maskelyne. And of course, Frosty Myers’ great arc light pyramids, first assembled in the four corners of Tompkins Square Park.
Yes, well, I guess we can move the Wigwam from the list of things I have to re-create someday to the list of things that have, in some way, at least, been re-created. 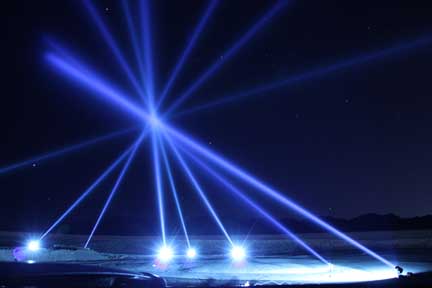 Last year, some guys from SyFy replicated the searchlight Wigwam in the desert for a bogus investigative show called, “Fact or Faked: Paranormal Files.” They were apparently trying to reproduce the flying saucer-shaped object caught in the apex of the beams in LA Times’ photo, which has apparently been cited as evidence of a military UFO coverup. Really.
The Times’ TV critic Ed Stockly had all the details. Including the show’s complete lack of interest in checking the actual photo, or the negative, both of which are in the Times Archive at UCLA. And which show clear evidence of being altered. The UFO is Whiteout. The beams are painted, the skyline is inked. The whole thing was retouched to make it reproducible for the printing presses of the day.
In the Times’ LA history blog, Larry Harnisch gets all Errol Morris on that photo’s ass, posting seven long times about it. [Take it from one who’s learned the hard way, Larry, strings of minutiae-filled posts are not enough to make a blogger Errol Morris.] 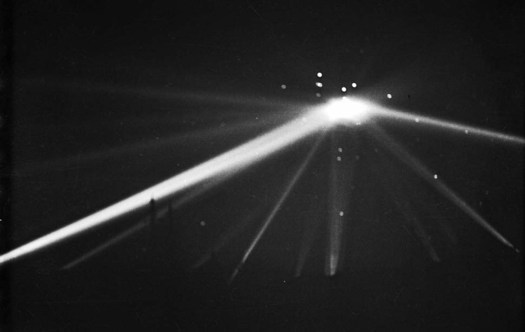 Meanwhile, Scott Harrison’s examination of the Battle of LA and the negative issue at the LAT’s photoblog, Framework is plenty for me. Plus it has better images. The original negative, above, is quite beautiful as is, and it is now on my list of negatives to visit in Los Angeles. And I think I will add printing it old school to my list of projects.
Original post mentioning the wigwam of lights