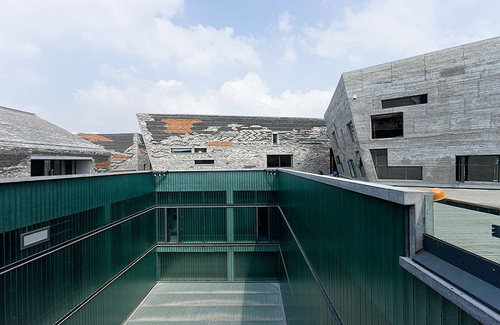 I’ve been busy as all get out, and only now do I realize I haven’t actually posted here for a few days. I blame Twitter.
Anyway, I’m not a real believer in the Pritzker Prize, except when it’s totally awesome, like right now, when they just announced Shanghai-based Wang Shu as the winner of the 2012 architecture award.
Since last night, when LA Times architecture critic Christopher Hawthorne tweeted the news, and promptly began livetweeting Wang’s lecture at UCLA, I’ve been trying to think where it was that I first discovered what’s probably the architect’s most significant work so far, the Ningbo History Museum.
Wang indeed seems like one of the smartest, most sensitive practitioners of architecture in China right now. I say seems, because I really don’t know what’s going on on the ground, below the Western starchitect marquee projects from CCTV to that awful opera house, to that other awful opera house to that Steven Holl Ground Zero-in-Beijing mess, to that one housing development where everyone was brought in to make a Shigeru Ban house on spec? I remember Alvaro Siza telling about designing a building in Guangzhou back in the day, and visiting it as it neared completion, only to find out when he returned for the ribboncutting that the developer client had hurriedly doubled it without telling him.
And then everything else seems like generic futureschlock, and a wholesale disregard for history that’d do the Cultural Revolution proud. And then there was Koolhaas’s presentation on the Pearl River Delta which envisioned all of Hong Kong as basically the future Lower East Side/Astor Place of a massive, 100-mile-wide New York City on the South China Sea.
So that’s my context, with nothing but raw spectacle with a modernist/internationalist veneer.
And then Wang’s Ningbo History Museum, which is surfaced with several million reused bricks, laid in patterns of the laborers’ devising, literally built from the rubble of the past it displaces–and repackages as museum content.
Wang turns out to have trained on construction and renovation teams, giving him an unusual sensitivity to material and process as they express themselves in form and space. I found myself nodding when Hawthorne compared him to Koolhaas, but then I thought, yeah, well, maybe the Koolhaas of Delirious New York, not CCTV and Put Me On The Cover Of Time Magazine. If anything, after this most recent OMA/AMO Venice show about the threat of History, Wang might be the anti-Koolhaas.
Anyway, I’m just rambling here without a plan, only because Wang Shu seems pretty amazing; his projects and proposals bode well, not just for China, but for the world with a modern China in it; and because I want to post one of Iwan Baan’s many illuminating photos of Wang’s built work. This one is the dramatic, hidden interior courtyard of the Ningbo Museum.
And thanks to Brian Sholis, who points to a nice collection of Wang Shu project images and information on the Pritzker Prize’s own media site [pritzkerprize.com]