At first I was thinking this is odd seeing Warhol himself going at something with a big ol’ brush. But then I figured the bloctchy paint scheme for the 1979 BMW M1 was similar to the underpaintings on his portraits, and to the Shadows paintings from the same time, so maybe it wasn’t that unusual after all. At least for him.
Though it was for BMW. Warhol was the first artist to paint directly on his art car rather than have the company execute his maquette, which according to Art Car Project responsable Herve Poulain, was done with “exaggerated gestures, like a dancer.” Combine that with his signature pit crew jumpsuit, and all the cameras, and it seems clear that Warhol was performing. 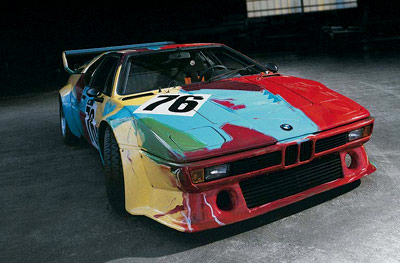 Poulain describes Warhol’s concept as camouflage, and a critique of the “war-like” aspect of racing, a reference neither he nor BMW apparently cared for.
commentary-free version of Warhol painting a BMW M1 [via warholstars]
Chattier, bouncier, talking head version of the making of Warhol’s BMW Art Car [via bmwdrives.com]