An interesting detail from The Economist’s report on Ai Weiwei’s house arrest, and the irony of the police order to stop broadcasting his own webcams:

And he knows of at least 15 police surveillance cameras mounted within 100 metres of his home. Spotting them is easy, as the police have helpfully chosen to decorate each camera with a bright red lantern.

Which can be seen in David Gray’s photo for Reuters, as published on msnbc’s China blog, Behind The Wall: 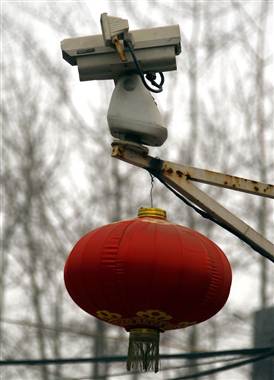 One thing, though: this tweet from March 27 seems to indicate that Ai hung the 15 lanterns himself, not that the police did.

In January, when Ai was taken in for questioning and accused of “damaging” the CCTVs trained on his studio, he said that “he had once hung a red lantern under one of the cameras ‘to make them look nicer’.”
And in December, BusinessWeek reported that only a single CCTV camera, the one in front of Ai’s door, had a red lantern on it, “marking National Day of the People’s Republic of China.” Which would be October 1st.
So did the police let Ai put up 14 more lanterns? Or did they replace Ai’s lanterns with their own? Do we call these lanterns knockoffs?
House Arrest in China: Orwell, Kafka and Ai Weiwei [economist via new-aesthetic]