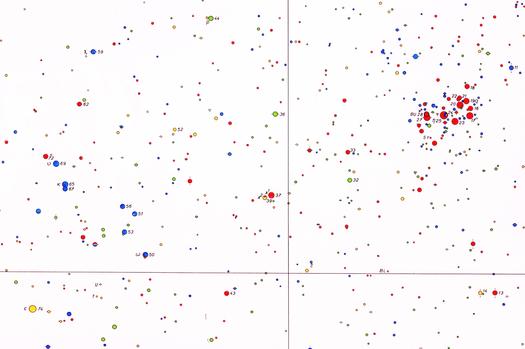 Plate from Antonin Becvar’s Atlas Elipticalis,1958, via ta3.sk
Welcome to the oldest tab in my browser: the Wikipedia page for the Czech astronomer Antonín Bečvář, who produced some extraordinary sky atlases which became indispensable astronomical reference tools around the world for decades.
Beginning with the Atlas Coeli in 1948, and then Atlas eclipticalis, 1950.0 (1958), Atlas borealis 1950.0 (1962), and Atlas australis 1950.0 (1964), Becvar and his team of students at the Skalnaté Pleso Observatory in Slovakia calculated, plotted, drew, and colored by hand every visible star in the sky over a certain magnitude, nearly 50,000 objects. The Sky Atlases were published in various editions, including large format, six-color printing with transparent overlays.
Harvard’s Sky Publishing Company acquired the international rights to Becvar’s atlases, and paid royalties, at Becvar’s request, in the form of astronomical photographic plates for his Observatory. I would imagine they are similar to the state-of-the-art emulsions developed by Kodak for the Palomar Observatory Sky Survey.
Which would all seem like plenty of hooks to get me interested, but there’s more. Because I learned of Becvar’s work while poking around the visual aesthetics, image, and artifacts of John Cage. 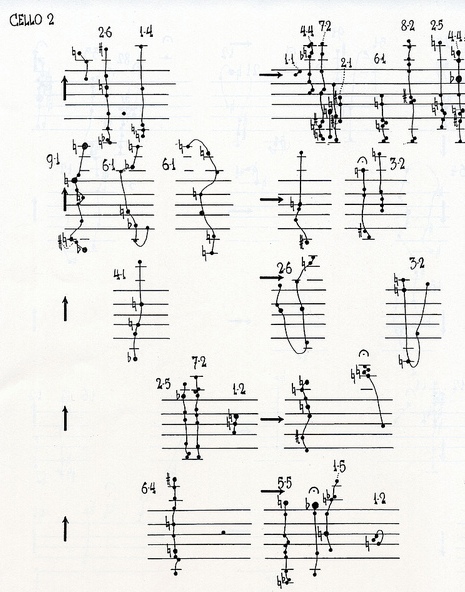 a page of the part for Cello II from Cage’s Atlas Elipticalis
Cage himself discovered the Sky Atlases in the observatory at Wesleyan, where he was teaching, and he used them to compose his first orchestral piece in 1961-2, Atlas Elipticalis. Cage overlaid the star charts with musical staves, and then used chance operations to determine pitch and to construct events [“constellations”] within each instrument’s part. Any number of the 86 parts can be played at any time, according to the conductor’s and performer’s discretion.

The piece debuted where it was commissioned, in Montreal in 1962, but it was the 1964 debut in New York that caught my attention. It was a shitshow, and Leonard Bernstein was at the center of it. Atlas Elipticalis was the first Cage composition performed by the NY Philharmonic. And the musicians–with Bernstein’s acquiescence, if not his collusion–basically sabotaged it, refusing to follow the score, or to take the instructions and parameters of the music seriously at all. They booed Cage along with the audience when he came out at the end of the piece. And Cage was apparently as angry as a Zen Buddhist could be. 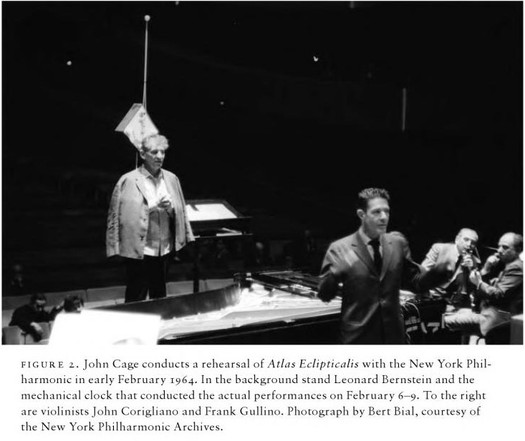 image via the cover of benjamin piekut’s book, experimentalism otherwise
At least part of the problem stemmed from Cage’s use of a clock to “conduct” the piece. Actually, a clock sculpture. Designed by Cage’s Stoney Point patron, the architect Paul Williams. In the chapter of his intricately researched historic snapshot of the NY Avant-Garde in 1964 titled, “When Orchestras Attack!”, Benjamin Piekut’s thorough reconstruction of the Atlas Elipticalis scandal includes a description of the workings of Williams’ clock, which marked the beginning, end, and the 2, 4, and 6 minute marks in the 8-minute performance with green, red, and white lights, respectively. The fate of this clock sculpture is at present unknown to me. But the hunt is on.
Becvar’s atlases [ta3.sk]
Antonin Becvar’s various Sky Atlases and catalogues on Amazon [amazon]