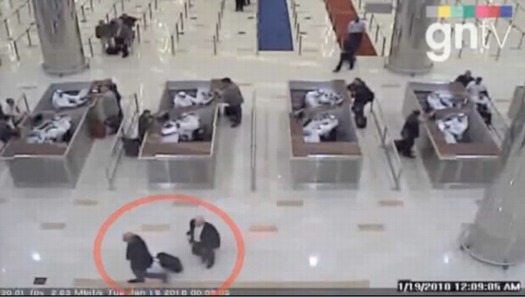 As soon as I learned of Chris Marker’s death, I went to look at what I’d written about one of his most recent projects, which I’d been so stunned by, only to find that I hadn’t written anything at all, only tweeted about it, which is barely more persistent than thinking about it.
And I don’t mean Marker’s show of surreptitious Metro chick photography at Peter Blum last year, which was cliched to the point of embarrasment. It’s the short Flash video Stopover in Dubai, which appeared almost unannounced on Gorgomancy, a pseudonymous Marker website. [I prefer the direct link to the .swf file] 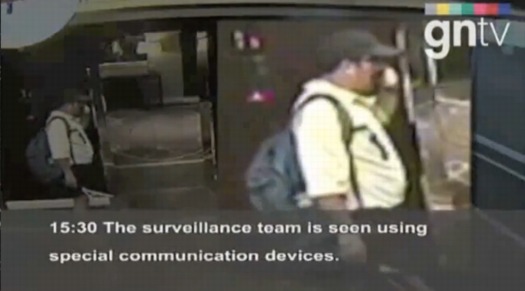 For all i thought I knew and admired about Marker’s work, from the touchstones of La Jetee and Sans Soleil, up to the improbable Immemory CD-ROM, Stopover In Dubai stopped me cold. But not [just] because of the content, though it is chilling.
Stopover in Dubai is the meticulous reconstruction of a Mossad hit squad’s surreptitious mission to assassinate Hamas military commander Mahmoud al-Mahbouh in his hotel room on January 19, 2010. The entire thing plays out silently, via CCTV surveillance video from all over the city. Not that anything actually ever “happens” in front of the cameras; the footage only shows the most seemingly banal images of people crossing hotel lobbies or waiting for elevators. 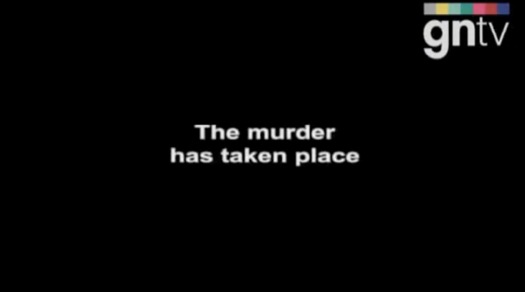 The footage was available because the show actually assembled, not by Marker, but by Dubai’s General Department of State Security, as part of their investigation of Mahbouh’s death. The riveting, 26-minute account of the hit, titled, The murder of Mahmoud Al Mabhouh, was provided by the government to Gulf News TV, the video news service of the UAE’s leading English language newspaper.

It was only after watching Stopover in awe, figuring out what it was, and then tracking down and watching the original version, that I realized Marker had appropriated GNTV/Dubai State Media’s footage exactly as they aired it, edits, captions, graphics and all. And yet he had completely remade the film. Marker replaced the news program’s generic, royalty-free, techno-lite soundtrack with a haunting, ominous string composition written by Henryk Górecki for the Kronos Quartet.
The music seems to fit perfectly, like it had been written, scored, or at least timed, to the film. Until I started digging, I’d assumed Marker had used segments of another film score, the way he’d mashed up this riot slideshow by the Times of London with music from The 400 Blows. But Marker actually just plays Górecki’s piece, “String Quartet No. 3 (‘…songs are sung’)” straight through.
Where I’d once questioned my interpretation and response to the film, wondering who was actually responsible for the elements of its success-its narrative, structure, pacing, and suspense–I now marveled at Marker’s ability to recognize how these two things existing in the world–the edited footage and the Kronos recording–resonated so powerfully with each other, and with himself and his artistic sensibilities. Marker didn’t need to do any more than make this impossible connection; it was the slightest gesture necessary, and yet the result is no less remarkable.
I don’t know if Marker saw it–maybe it’s in the liner notes for the Kronos CD–but a Nonesuch text complicates the relationship between the Górecki composition and the Mahbouh assassination in unexpectedly poignant ways.
GNTV’s opening titles tell us that the Mossad had been pursuing Mahbouh for years without success. Kronos, meanwhile, had originally commissioned Górecki to create a third work for them in 1992, and it was set to debut in 1994. But nothing came. For over 13 years. The composer finally delivered the work in 2005, with a dedication,

“To the Kronos Quartet, which for so many years has waited patiently for this quartet.” In a commentary attached to the score, Górecki added that the work had been completed in 1995, “but I continued to hold back from releasing it to the world. I don’t know why.”

The quartet’s title, meanwhile, “is inspired by the last line of a poem by the Russian poet Velimir Khlebnikov, ‘When people die, they sing songs.'”
Just as Kronos’ long, patient wait for its song resonates with the Mossad’s long-fruitless hunt for vengeance/justice/death, the suspenseful score of a found footage, real life spy thriller is revealed as the song the target–who barely appears in the movie itself–sings when he is drugged, paralyzed, and smothered in his hotel room, out of the cameras’ view, but still within the auteur’s reach. Who was, in this case, Chris Marker.