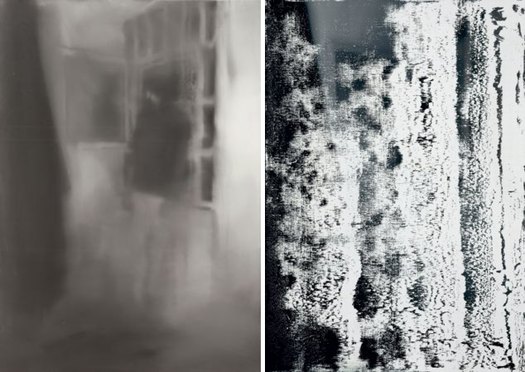 Wendy Lesser’s essay on the installation of Gerhard Richter’s Baader Meinhof series amidst the historical paintings at Berlin’s Alte Nationalgalerie is long, but very worthwhile.
She writes about how, along with MoMA’s 15 October 18 paintings, the exhibition included Blanket [above, right], a related painting that Richter squeegeed over and renamed sometime after finishing the series in the summer of 1988:

That is the end of October 18, 1977. But in this exhibit in the Schinkelsaal, there is a final sixteenth painting, a vertical canvas the size and shape of Cell or Hanged [above, left]. It is called Blanket, and it consists largely of white paint covering a darker (but still monochrome) undersurface. The white has been thickly pulled over the entire canvas–presumably from right to left, since the upper and lower corners on the lefthand side have escaped full coverage and still remain black. There are black patches and streaks amid the rest of the white too, but we have no way of knowing what is underneath; or rather, we would have no way of knowing, except that the wall caption tells us this was once a painting of Gudrun Ensslin hanging in her cell, a near twin of Hanged. What has merely been blurred in the other paintings has here been obliterated, as if even the oblique and indefinite sight of things proved too much.

As if. Because like blurring, squeegeeing ends up being a strategy for Richter to signal this kind of judgment without actually making it. We can know, or at least presume, what is under Blanket precisely because of its blurred doppelganger.
It’s worth noting, though, that even though Blanket has been exhibited extensively over the years, including in Rob Storr’s “40 Years of Painting” retrospective in 2003, this appears to be the first time it has actually been placed directly in the context of the 18. Oktober 1977 paintings.
Richter’s Masterpiece [threepennyreview]
Previously, and very much related: Overpainted Gerhard Richter Painting