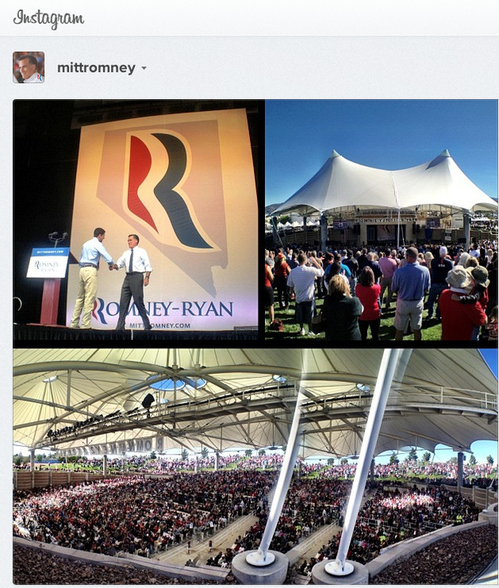 This Romney staffer’s Instragrammed collage of a Las Vegas rally has been making the rounds because, holy smokes, people, everyone knows that the Republican tent is not that big, and anyway, right now it only has one pole: just cold say and do whatever the )$#( it takes to beat the black guy.
Which, even so, should put such a baldly distorted, manipulated image on the far side of WTF. So far, in fact, that it makes me think it really has to be attributed not, for once, to their propagandistic lying, but to a glitch from an auto-pano-stitching algorithm.
I tried to find the link again, but I’ve seen the iPhone 5’s new panorama function occasionally erases moving cars. Do any non-partisan panorama people recognize this as typical of a particular app, or smartphone?
Previously and definitely related, and wow, really? “Whatever It Takes?” on 10/28/2004? Sforza now spelled with a CTRL-V