We can’t really control when an idea will come to us, or when it might subsequently feel significant, more than a fleeting whim. But we can decide when we make it known. And when we should maybe just shut the hell up about it for a while because seriously, people.
So one day, while driving and explaining to the kid the difference between a car logo and a hood ornament, and how sometimes, people put their own hood ornaments on their cars, usually Jeep Wagoneers, it hit me: artist-designed hood ornaments.
I mean, why should the vinyl wrap industry have all the art car fun?
They’d be awesome little sculptures, made in limited editions. Maybe they could be chromed steel, but they could just as easily be something else: acrylic. Resin. Cast glass. Wood, I suppose. They could be made or readymade. There must be some kind of universal [or relatively so] base attachment mechanism.
Oh, what an interesting context for artists to engage.
And that was that. Until the next day, when the new Artforum arrived. And there on page 52 was Alison Gingeras’ remembrance of visits with the late Franz West who, despite not driving himself, “had a crazy obsession with luxury cars.” 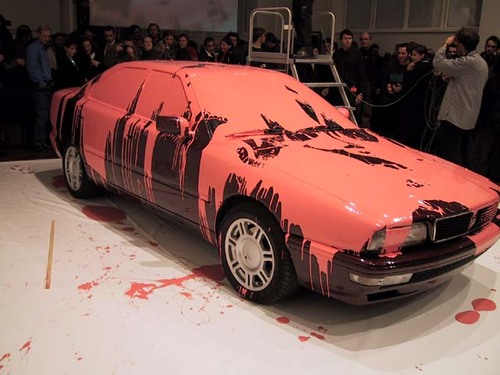 [See more images at basis-wien.at.]
She told of a November 2001 museum performance in Vienna, Aktion PAR BLEU (Le Limousine Bleu), where West used a watering can to pour candy pink housepaint on a maroon Maserati Quattroporte. 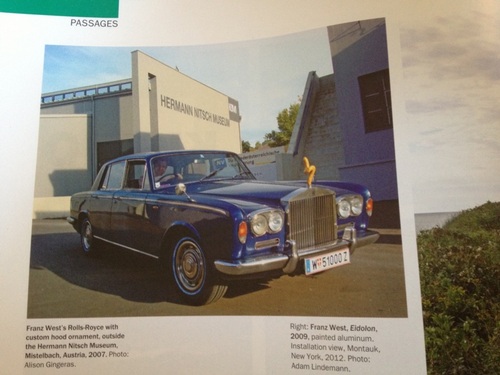 And how West was thrilled about having traded a work for a vintage Rolls Royce:

By the time I got to see his prized chariot, it wasn’t just a Rolls–it had been Westified. He swapped out the Spirit of Ecstasy…for one of his suggestive sculptures rendered in miniature. The view out the front windshield was now accented by a brownish abstract squiggle, which resembled a cross between poop and a penis. In fact, he made a few of these hood ornaments and stored them in the glove box: different colors and forms that he switched out on the daily ride to his Esteplatz studio, depending on his mood.

Which gets at the reality of how people often treat their cars as extensions of themselves, projections of their identity; or conversely, how cars are perceived–and created and marketed–as public embodiments of their occupants’ identity. West’s little artworks went into the world just ahead of him, altering his interactions with it.
With Gingeras’ story as the greatest proof of concept ever–no other mentions of West’s hood ornaments turned up online–I resolved to blog it up pronto. And then Hurricane Sandy started closing in. 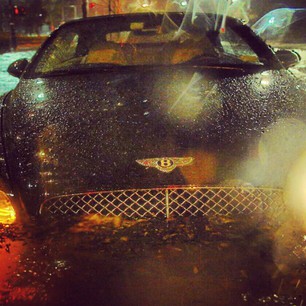 image: Casey Neistat’s instagram
And small blessings, I didn’t get around to mentioning it during the uneasy joking-in-advance period. And it was forgotten completely, and it wasn’t until just now, as I re-read Gingeras’ focus on luxury cars, that I even made a connection to the emotional peculiarities of seeing tree-crushed Range Rovers or submerged Bentleys in Sandy’s photostream. I’m not sure why that is.
Anyway, hood ornaments by artists.