I just saw this blog post float by on Twitter, and the title immediately made me think of Random International’s Rain Room, which, of course, just opened at MoMA as part of Expo1.

It also answered the question I’d never asked until that moment: what if Walter de Maria’s Earth Room and Lightning Field ever hooked up and had a kid?
“Rain Room,” according to MoMAPS1, “consists of a field of falling water that visitors may walk through and experience how it might feel to control the rain.” Which is amazing, because on Saturday afternoon, I was sitting in my car in Chelsea as this intense downpour passed by and pummeled everyone on the street.
Gallery walkers would huddle under the High Line until it proved too tall and useless against the windswept rain, and they’d have to evacuate to a nearby street scaffold. People also ducked into the nearest gallery, even if it was one you never go into.
The storm warning announcement just a few minutes earlier on the radio had warned of “quarter-sized hail”, so I parked under the High Line to protect my windshield and paint job.
But the WNYC storm warning also included something I’d never heard before: a warning to get inside because you could be struck by lightning. Which, honestly. What are the odds? Except that when you are in the middle of a weather event like that, it does feel like your odds get immediately, exponentially better. Or worse, I guess, depending. And for people standing on a railroad in the sky, they get worse still. Statistics and logic are overwhelmed, or at least put to the test, by physical experience and emotion. 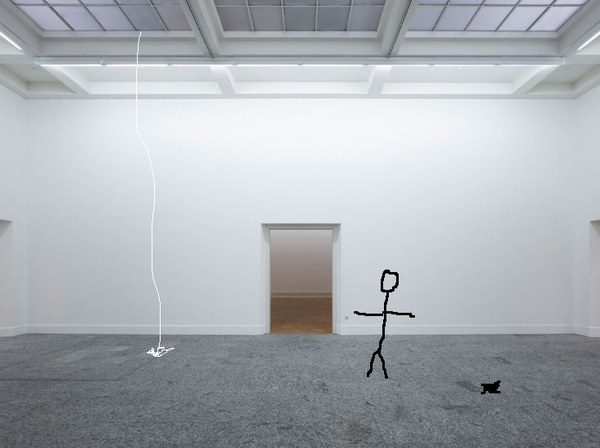 And so The Lightning Room. It is an empty gallery where lightning bolts are occasionally generated. And none of this van Graaf generator, hair-stand-on-end science fair lightning, either: it has to be real, kill-you-dead-or-at-least-fry-your-eyebrows-and-your-sense-of-smell lightning.
To enter it, you have to sit through a briefing or a safety film, some kind of orientation about the deadly risks posed by possible lightning strike, and then you sign a thick waiver absolving the institution of any liability or responsibility. Maybe they sell you life insurance policies on the spot, with part of the proceeds supporting the museum. Contingent planned giving.
If you had certificates for the people who went in, or even stickers, it could be too much incentive for idiots to try it, so you really can’t offer anything. And of course, most people who do go into The Lightning Room are not going to get hit. Nothing’ll happen at all. The point has to be, though, that something could. As Maggie Millner said in that otherwise unrelated blog post mentioned up top, “An empty space is a space full of potential.”
If art can be a giddy dance room offering the technologically mediated illusion that we can control the weather, it can also be a room with a potentially deadly menace where the only control we have is over whether we engage it.
Related: John Perreault’s review of Voids: A Retrospective, an exhibition at the Pompidou and Kunsthalle Bern [above] in 2009 [artopia]