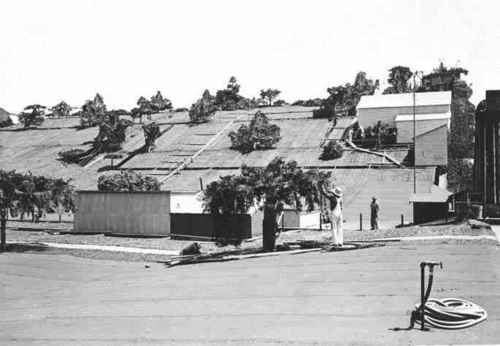 From 2009, The Roof as nth Facade, about Google Maps-optimized architecture:

Maybe the next Bilbao Effect, sure to appeal to striving cities in these difficult budgetary times, will be to commission grand architectural designs purely for the benefit of the Google Maps audience. Like the rural streetscape camouflage which was applied to the roof of the Lockheed airplane factory in Burbank to thwart Japanese bombers during WWII, cheap, easy, flexible Potemkin roof structures could really put a town on the map, so to speak.

It seems so long ago, but in architecture terms, I guess four years is pretty quick. I just didn’t think it’d be Mr Bilbao Effect himself, Frank Gehry doing the camouflaging. And of course, it’s not the city, but a giant corporation, Facebook, the Lockheed of identity, that’s doing the hiding. 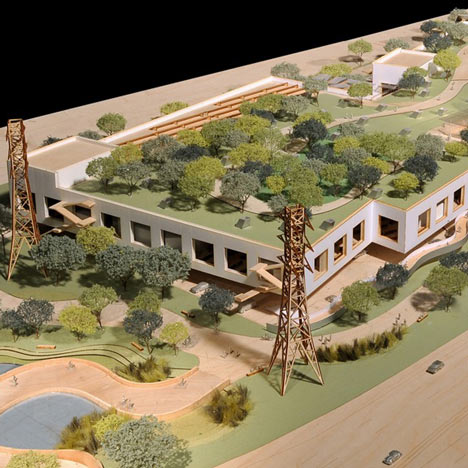 Here is a detail of a model of the Menlo Park building Facebook asked Gehry to design. From Dezeen in April:

Early proposals for the campus, which was given the go-ahead by Menlo Park City Council last week, envisioned a bold, curving facade reminiscent of well-known Gehry buildings such as the Guggenheim Museum in Bilbao.
“They felt some of those things were too flashy and not in keeping with the kind of the culture of Facebook, so they asked us to make it more anonymous,” said Craig Webb, a partner at Gehry’s practice.
“Frank was quite willing to tone down some of the expression of architecture in the building,” he told the Mercury News, explaining that they plan to disguise the white stucco building with a rooftop garden: “Our intent is that it almost becomes like a hillside, with the landscape really taking the forefront.”

Or at least the appearance of landscape, on the roof of your 400,000-sq ft. relationship processing facility. 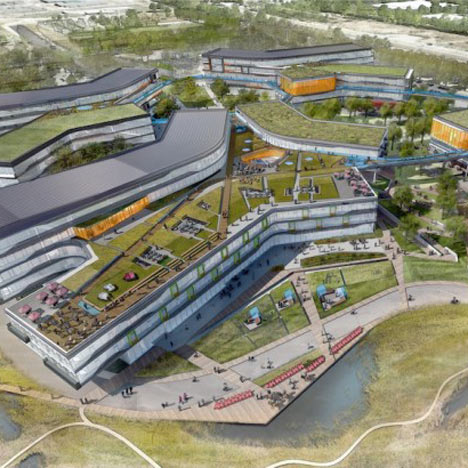 It’s worth noting that this green-roof-as-park approach is being used by NBBJ for their new office complex–for Google. Google is hiding from Google Maps, too. As Sam Jacob writes at Dezeen, “Though its appearance is closer to an average business park, it too has its roofs littered with green stuff.”
There are obviously many environmental and energy-use-related benefits to a green roof. But they also serve to mitigate the appearance gap between the “average business park” and the powerful technology companies inhabiting them. Invisibility through greenery, melting into the landscape, these are time-tested tools for managing an architectural first impression, as in bucolic renderings designed to mollify local land use and governmental constituents, or the landscaped, sculpture-filled approaches to the corporate HQs of the 1960s. Now every visitor’s first encounter with the buildings is when they look them up on Google Maps. And now they’ve got those covered. 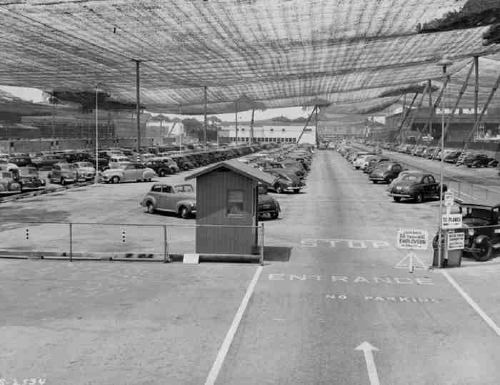 And though I didn’t grasp it at the time, it’s no surprise that these particular companies are the clients trying to become “more anonymous through these hillside camo roofs:

On the one hand, it seems obvious that this vast, global audience [on Google Maps] should be factored into the creation of architecture. But on the other, it seems absolutely insane to design a structure, a space, for people who won’t be anywhere near it, but sitting in front of some screen on the other side of the world.

Because the target of their disappearing act is their own users. Just as malls hide acres of parking lots behind roadside shrubbery, Google and Facebook are hoping their park-like roof facades will keep us from noticing the extent of their corporate footprint, and their relentless sprawl across our online landscape.
Previously: Heads Up: Roof as nth Facade [greg.org]
images via Sam Jacob’s Dezeen op-ed, ‘Cities are being redrawn according to Google’s world view,’ which, right? you’d think, but ends up going in a completely different direction. [dezeen]