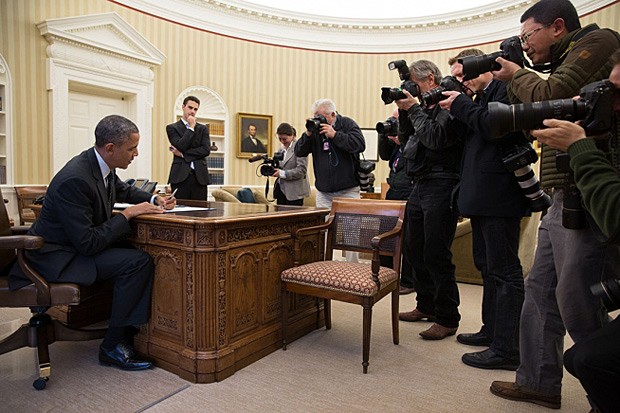 “Oh, just the press getting access to the Oval Office, NBD,” Pete Souza trolled.
It’s almost embarrassing that I did not make the Sforza/Souza connection until this outrage crested. But maybe now is the right moment.
Last month the White House News Photographers Association and 37 other groups and media organizations complained to the White House that they were being frequently blocked or excluded from covering Pres. Obama’s activities. And that the White House was instead releasing its own video and photographs, usually taken by WH official photographer Pete Souza.
Team Obama responded, it seems, by releasing the above Souza picture as the White House Photo of The Day. And as USNews reports [really? They’re even still around?] the “media” were “enraged”:

Julie Mason, SiriusXM POTUS press pool host and former White House Correspondents’ Association board member, saw Friday’s photo and suggested it was an equivalent to a middle finger, a snub and an eye roll. “All of that, plus a drop of anxiety,” Mason wrote in an email. “Behold how sensitive the White House is to claims they shut the press out.”
BagNewsNotes, a website that analyzes images, was the first to notice Friday’s Oval Office picture and called the White House “incredibly petty” for putting it out, arguing that photojournalists should have been offered the opportunity to capture President Obama doing something personal, instead of another staged photo-op.

People in high places should always be mindful how much they are saying, or not saying, with a picture. If the White House intended even a half-respectful gesture, they would have provided access to the president yesterday in a spot that was personal, doing something personal — graciously offering to the visual media (if just to lower the heat and at least suggest you get it) just one of the hundreds, maybe even thousands of scenes only Pete Souza has been privy to for six years now.

Half-respectful gesture? Graciously offering? I guess now I’m at a loss as to what the actual problem is here.
The actual letter sent to press spokesman Jay Carney argues that the WH is wrongly excluding journalists by declaring public, newsworthy White House activities “private,” and then releasing only official photos. But BagNews is complaining about Souza’s insider exclusive on actual “personal” activities. These are completely different types of events. 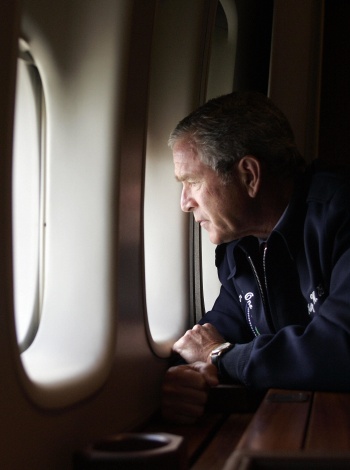 real or real staged? I can’t tell or remember now.
At first I’d just meant to post a quick plus ça change, because literally the exact same complaint had been lodged by the same photographers against the George W. Bush administration, in 2006. Then the issue came to a head when the White House released a photo of Bush looking out the window of Air Force One on a brief Katrina flyover. Except when I went to look for the image, it turns out that photojournalists had been permitted to take essentially the same shot, including the AP’s Susan Walsh, who filed the 2006 handout complaint.
The issue has not died down, just the opposite. A couple of weeks ago the AP’s Santiago Lyon wrote an op-ed in the NY Times titled, chillingly, “Obama’s Orwellian Image Control.” Lyon cites iconic photos or news-worthy moments that photojournalists captured which “show–surprise–the president is human.” Except all but one of Lyons’ examples were outside the White House [Nixon leaving], straight news [Reagan’s hospital window], or at totally staged press events [GWB’s Sept. 11 bookreading, and his rousing rubble mounting at the WTC.]
The other example, JFK Jr. peeking out from under his father’s Oval Office desk, does not serve Lyon’s argument well. Kennedy had calculated the political value of his children’s images from early in his campaign, and photojournalist Stanley Tretick had become the president’s go-to guy for sympathetic, “human” images. He was the Pete Souza of his day, whose nominal employer happened to be, not the White House, but LOOK Magazine. In October 1963, two months after the death of their third child, and when the overprotective Jackie was vacationing on Aristotle Onassis’ yacht, JFK brought in Tretick for some exclusive hangin-out picture time with the kids. Is this the kind of independent journalistic access the media is clamoring for? 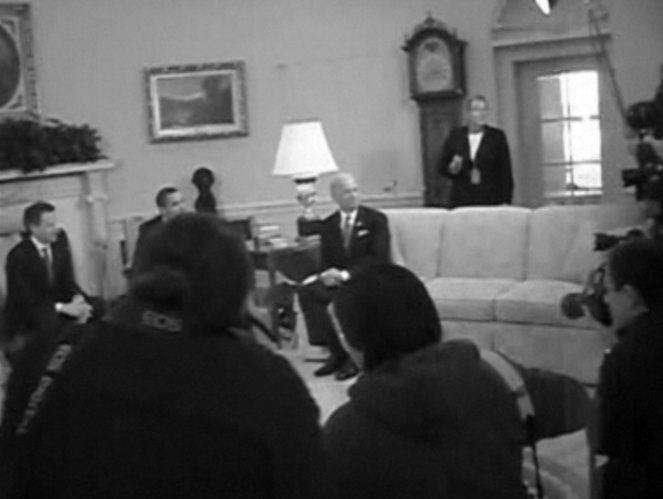 img: still from Stephen Crowley’s epic 32-sec. pool spray video, 2009
I think the journos are totally right to give the administration crap about limits to access; they should push for whatever they can, and raise the political price for the WH’s own communications/image policy. But let’s look at what they’re really arguing over: ‘pool sprays,’ 30-second drive-by photo ops of people doing nothing. Let’s see what we’ve already lost: ‘Sforzian Replays,’ where the president re-performs some act or re-gives a speech for video and still photographers. The White House image machine is weird and complex and conflicted, and everyone wants to control it to their own ends.
If Special Moments or human interest photos are being brought in-White House, then old/corporate/non-government media should come up with a new visual product. And maybe they start by looking around at their own freakshow presence. BagNewsNotes said some photographers read Souza’s image up top as an act of visual aggression, “a subliminal ‘screw you.'” Why don’t they give right back? 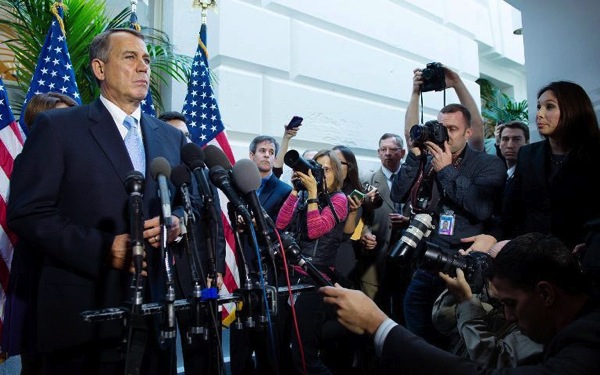 What’s going on, symbolically of course, are the press members — as the proxies of the people — not just dropping their typical submissiveness but actually challenging Boehner’s destructiveness and irresponsibility.

BNN also calls it “breaking the contract,” [their scare quotes] the contract which apparently precludes media from “panning out,” thereby acknowledging its own circus existence. BNN’s editorial take is that Boehner and the GOP basically brought this chaotic imagery on themselves.
Is there a White House “contract” too, and if so, hasn’t the White House broken it, and mightn’t White House beat photographers protest by taking nothing but complicated and aggressive pictures? If the Obama administration’s only giving them shit images, why don’t they put it in a bag on the White House porch and light it on fire?
White House Pic of the Day of Media Enrages Media [usnews.com]
Shooting Boehner: Shutdown Visuals Meet GOP Aggression [bagnewsnotes]
Limit on Access Stirs Tensions Between White House Photographer and Press Corps [nyt]
Obama’s Orwellian Image Control [nyt]
Previously: It’s all done with mirrors
And previously in the Bush era: WH Beat Photogs Upset At Staged Photographs They Don’t Take