So I did as I was told this morning, and clicked: 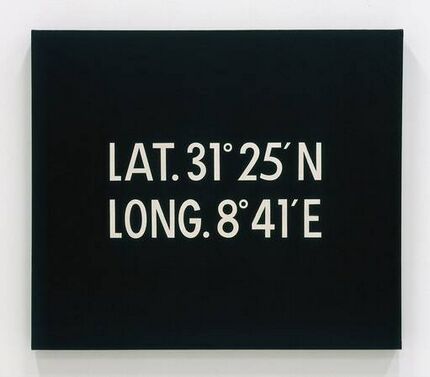 And now I’m confused. So I googled: 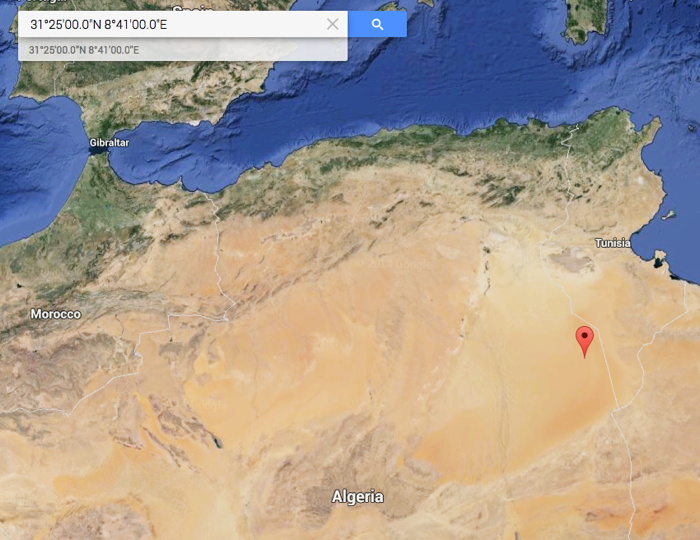 And now I’m even more confused. The painting is from Joseph Kosuth, but it’s by On Kawara. It’s titled Location, 1965, one of his earliest canvases still in existence. It’s one which predates, but obviously prefigures, his Today series, which began in 1966.
Only it’s not a series. And its coordinates, in the middle of the Sahara desert in eastern Algeria, don’t indicate where it was painted. It happens to be called the Grand Erg Oriental, the Great Eastern Sand Sea. But as a location it’s so utterly remote and barren, it’s more like a noplace than a someplace. 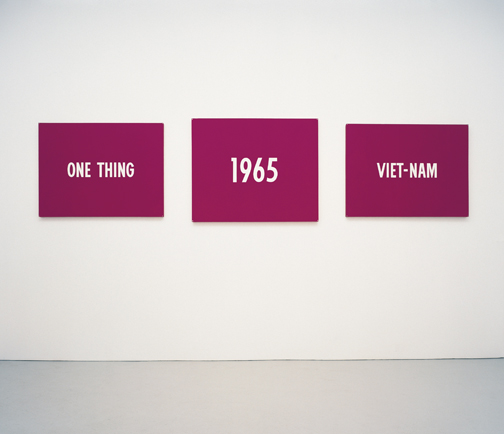 Title, 1965, collection nga.gov, image via
So what is it, and why? I have no idea. At first I thought it might have some highly political resonance like another of Kawara’s early paintings, Title, also 1965, the magenta triptych that seems like a protest against American military involvement in Vietnam.
Algeria had been the site of a devastating and anti-colonialist war against France, the aftermath of which continued well into 1965. Kawara moved to Paris from Mexico in 1962, just as France was losing, and hundreds of thousands of Franco-Algerian refugees began pouring into the country.
Kawara’s not one to explain his art, though, or talk or write about it at all. In fact June 1965 was the last time he discussed his work publicly, in an interview with Bijutsu Techo critic Homma Masayoshi. I’m trying to scare up Homma’s text from some Japanese library stack, but otherwise, who knows?
Well, maybe Joseph Kosuth does. Kosuth donated the atypical Kawara painting to the Van Abbemuseum in 1980 with the tagline, “in memory of Fernand Spillemaeckers,” his Belgian dealer who passed away in 1978. Spillemaeckers was instrumental in introducing conceptual art to Belgium, and he gave Kosuth a show in 1975. I imagine he was instrumental in Kosuth’s Text/Context billboard exhibition, which kicked off in Europe at the van Abbemuseum. 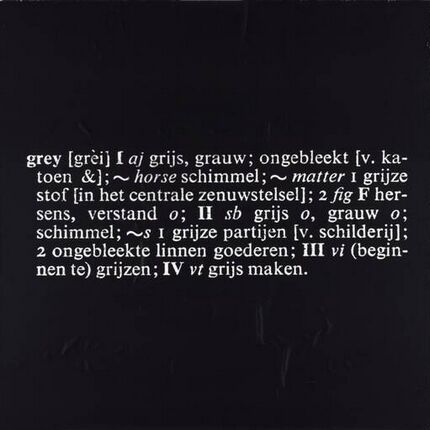 Art as Idea as Idea, 1968, collection vanabbemuseum.nl
Or maybe Kosuth threw the Kawara in for free after Spillemaeckers sold the van Abbemuseum a half dozen formally similar Kosuths in 1977-78, including five Art as Idea as Idea photostats from 1968, and the ink-on-glass series One and Nine A Description, from 1965.
Location hasn’t been shown much, or written about almost at all. It was reproduced in the catalogue for GNS [Global Navigation System], a 2003 collective show at the Palais de Tokyo. According to their blog, the organizers had proposed a project to Kawara, who rejected it, but allowed them to include Location. [So it’s not that Kawara doesn’t talk about his work; he just doesn’t talk about it with you.]
And of course, it will be included in The Part In The Story, an exhibition curated by Heman Chong and Samuel Saelemakers, which opens at Witte de With in May. If they’re tweeting about it with this much lead time, maybe this is finally our chance to find out what’s going on with this Kawara painting.
The Part In The Story Where A Part Becomes A Part Of Something Else opens May 22 at Witte de With [wdw.nl]