This popped out at me while reading the Christopher Williams catalogue, The Production Line of Happiness (yellow edition, btw) last night:

There was no image anywhere in the book, but in his essay Mark Godfrey discusses the show, one of a series of group shows in 1984-85, and the photo diptychs Williams produced for them:

In 1984, for his contributions to a set of group shows in Paris (at Galerie Crousel-Hussenot), Ghent (at Gewald), Amsterdam (at De Appel), and New York (at Marian Goodman Gallery), Williams juxtaposed a reshot Pulitzer Prize-winning photograph of an execution by bayonet in Bangladesh with a photograph of the city where he was exhibiting, produced for the tourist industry and sourced from local image banks. When the four works were brought together in a group show at the New Museum of Contemporary Art in New York in 1985, Abigail Solomon-Godeau wrote that Williams’s “insistence on site-specificity, both in a geographic sense (the city represented by the tourism photo is changed to represent whatever city the work is exhibited in) and in an institutional sense (the work is conceived to call attention to the museological “frame”) militates against the neutralization of the works’ politics by the art institution that houses it.” [p.79]

There was nothing on Google, but the New Museum’s awesome digital archive has installation shots of Williams’ works in the show, “The Art of Memory / The Loss of History,” which was curated by William Olander. 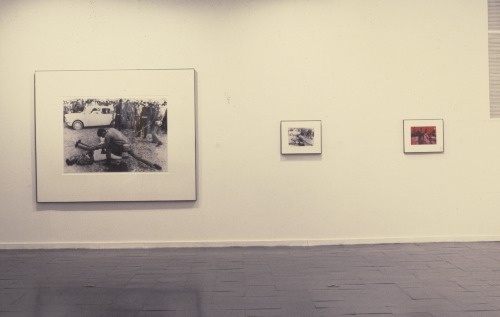 Here is how On New York II [sic, I’m sure the actual title’s 10x longer] was installed [see archive.newmuseum.org for larger images and details]. Those look like 10×8 to me, tbh, not 10×14. Here’s a pairing of stock tourism photos the New Museum’s calling On Amsterdam / On Paris. Fine, maybe that is 10×14. 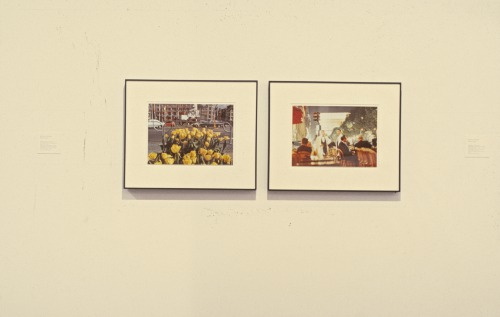 Anyway, it’s the Paris installation that caught my attention, and that’s what I’m trying to imagine. So these thin frames, these deep mats, and these two images side by side: 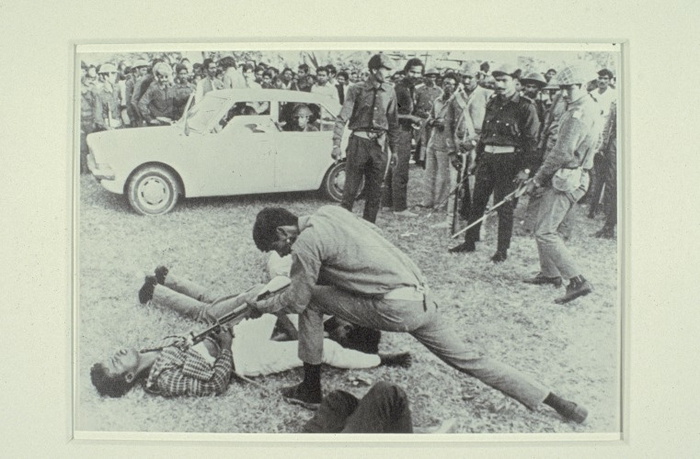 a rephotograph [!] of a Dec. 18, 1971 photo by AP correspondents Horst Faas & Michel Laurent [this 2012 tribute page to Faas has a shot from a different angle of a different guy bayonetting the same guy in the plaid shirt. It doesn’t take Errol Morris to realize the scene is extended and complicated, and the presence of the photographers is not neutral.] 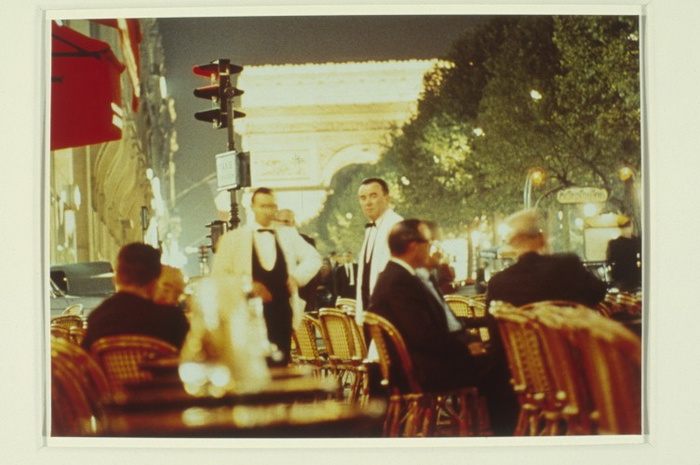 and a glittery night scene in a café on the Champs-Élysées, by Morton Beebe. The red awning makes me think it’s Fouquet’s, just south of the Georges V metro entrance, unless there was a café across the street, where the Louis Vuitton store is now.
It didn’t occur to me until I started putting together this post just how sparse the online information is about Williams’ work and history, but also how fragmentary any of it is. The New Museum’s online archive is extraordinary and almost unprecedented in its scope and accessibility, especially for an institution of its size. And yet there is so much of the work and the experience that is not captured, so much that must be interpolated from these documentary traces. From the titles to the dimensions to the catalogues, checklists and installations, Williams’s exacting practice indexes and exposes the limitations of the archival view, and thus, of photography and history.
Which had nothing to do with why I’m writing about this at all right now. It was the name Morton Beebe, the photographer of the Image Bank picture for Paris, which caught my eye. Beebe sued Robert Rauschenberg in 1979 for copyright infringement for using one of Beebe’s images in Pull a Hoarfrost series print on silk. Beebe himself and the copyright industry professionals have cited the case regularly over the years as a victory against appropriation. [I wrote a couple of posts about Beebe v. Rauschenberg in 2012. Apparently I was the first/only person who’d ever requested the actual court documents. Which makes it even worse that I still haven’t written my final post on the case. It’s on my list, though, I swear!]
I was ready to concede that Beebe’s presence in Williams’s work was a coincidence, but then I remembered Beebe’s battle was the opening anecdote in what turns out to be the first substantive coverage of photo-based appropriation, a 1981 article in ArtNEWS by Gay Morris titled, “When Artists Use Photographs: Is it fair use, legitimate transformation, or rip-off?” And I can’t believe that Williams, of all artists who use photographs, would not have noticed.