They are not the kind of thing to get excited over, necessarily, but every time I think about Agnes Martin’s 1973 screenprint portfolio On A Clear Day, I like them a lot. [I did not like seeing a complete set baking in the sun in someone’s freshly renovated loft kitchen one time, though. Respect, people.]
Martin had given up painting for seven years, and the invitation from Luitpold Domberger to create a print portfolio was instrumental in Martin’s decision to start making work again. [That she was also preparing for her first mid-career retrospective at the ICA in Philadelphia at the time might have helped. I guess we should read the new biography and find out.] 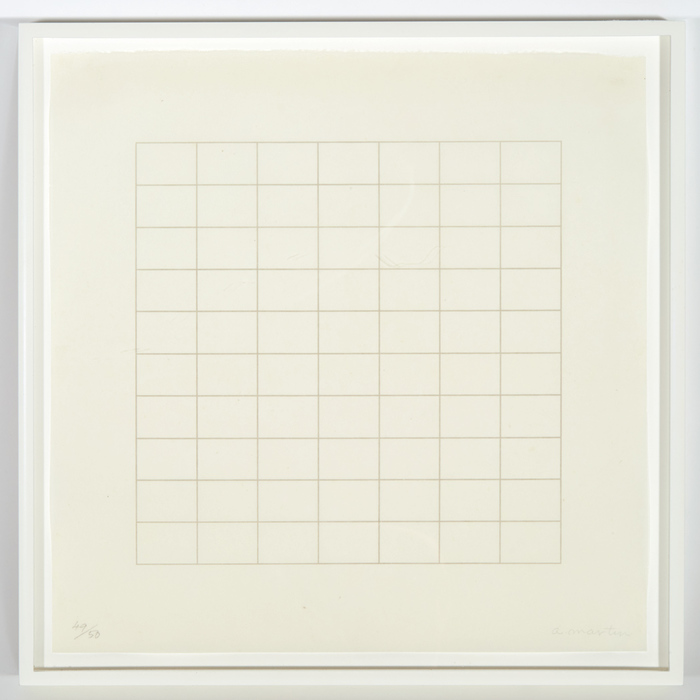 Anyway, On A Clear Day is 30 images Martin selected from over 300 drawings she’d done in 1971. So a subset, perhaps, more than a series. And a mechanical interpretation of her hand marking process.
The 8×8 prints on 12×12 sheets are printed in an edition of 50, plus 14 APs. It is not clear how many portfolios were kept together, but a bunch were broken up, and loosies show up at auction all the time. One’s coming up at Doyle in a couple of weeks, in fact: plate 8 from ed. 49/50. The estimate seems a bit low, but it says there’s a soft crease in the image.
I hate broken up sets, and have long wondered if you could put one back together. And by you, obviously, I mean me. How long would it take? Could you track them down, or do you just have to wait and watch? Which number should you work on? Should you keep a stash of loosies available anyway, to trade with reluctant sellers?
What have these prints been through since they’ve been apart? Have they been cared for, kept out of the sun? Framed nicely? Framed crappily? Lone silkscreens are not very precious. And there are nearly 2,000 of these things out there. Some might be shoved in drawers, or stuck inside a book. Isn’t it likely that some might not have survived at all? If there are already a couple dozen complete sets around, what’s the value to Martin’s legacy of one more?
But I guess it’s not really for or about Martin at all. She just provided the raw material for the project. If a reassembled Agnes Martin portfolio is a new work, Untitled (On A Clear Day), would an assemblage of mismatched Martin prints be a study?
I remember very well the set of ten On A Clear Day prints up top, which were at Phillips in 2008. They are a ragtag bunch of misfits, actually: three “a.p.s,” six “p.p.s”, and only one actual numbered print: plate 4 from, oh hey, 49/50. This project may start right now.
Oct. 27, 2015: Lot 125 Agnes Martin (1912-2004), ON A CLEAR DAY, est. $1,000-1,500 [doylenewyork]