I have not touched on my Hamilton amazement here yet. I figured I’d save it for the review, which would follow soon after getting tickets. [insert gif of endless horizon retreating from me.]
But I have to write about one place in the score that tears me up, when Chris Jackson sings George Washington’s final address over Lin-Manuel Miranda’s Hamilton, who reads it aloud:

[WASHINGTON]
…Like the scripture says:
“Everyone shall sit under their own vine and fig tree
And no one shall make them afraid.”
They’ll be safe in the nation we’ve made
I want to sit under my own vine and fig tree
A moment alone in the shade
At home in this nation we’ve made
One last time
…
I anticipate with pleasing expectation
that retreat in which I promise myself
to realize the sweet enjoyment of partaking,
in the midst of my fellow-citizens,
the benign influence of good laws
Under a free government,
the ever-favorite object of my heart,
and the happy reward, as I trust,
Of our mutual cares, labors, and dangers.

Emphasis added for the lines that just do me in every time, even as I type about them now, as I think about the millions of people who don’t feel safe in this nation we’ve made, or who find suffering, injustice, or even death, under the far-from-benign influence of our laws and government. 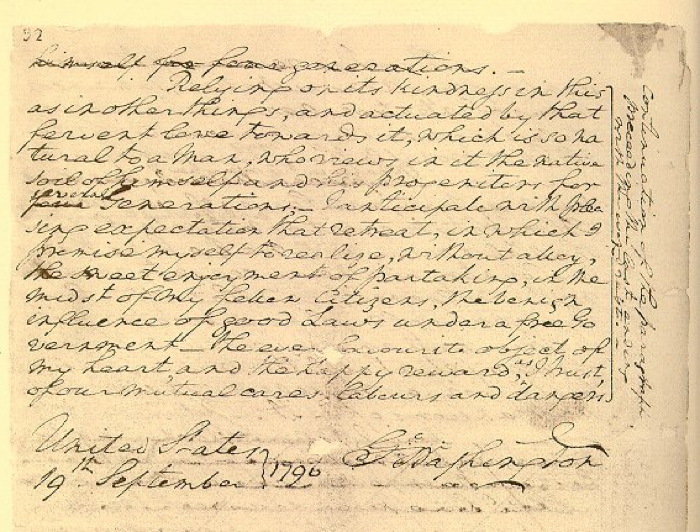 image: from the final page of the final manuscript of George Washington’s Farewell Address, via gwpapers.virginia.edu
This was literally the kicker of Washington’s parting address, his wrap-up, his mic drop. And to look around at this mess we’ve made, the Founding Fathers’d be like smdh.
One Last Time, from Hamilton [youtube, lyrics via genius]
Buy Hamilton (Original Broadway Cast Recording)(Explicit)(2CD or MP3) [amazon]
[note: fwiw, when I bought the album, I ended up swapping out the explicit tracks with the broadcast-safe versions I ripped from NPR. You know, for kids.]