Now that I’m on the other side of it, I’m kind of amazed at how much the ideas that led me to Chop Shop resonated with the discussion Phyllida Barlow had at the Nasher Sculpture Center with Tyler Green. The live conversation was on MANPodcast in July 2015. 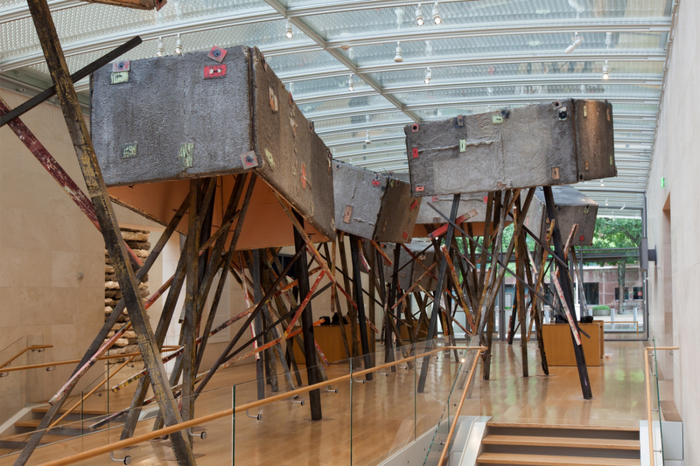 Phyllida Barlow, tryst, 2015, installation at Nasher Sculpture Center, Dallas [image: manpodcast.com]
I was listening to it again tonight on the way home and pulled some highlights: like this idea of fragments:

It always seems to me extraordinary that our lineage of Western art is dependent on broken fragments of things for which we have no proper-I mean, we look at torsos that don’t have limbs, that come from Hellenic times…and they’re iconic. ‘This is great.’ and Western art runs out of that greatness. And there doesn’t seem to be an issue that the arms are missing, or the legs are missing.
So the fragment and the half-finished has for everybody-it does for me-a certain beauty. it’s sublime. [9m00s]

This notion of the fate of art:

Really a question that emerged very early on, which is, ‘Where does art end up?’…Do you, as in my case, enjoy it, or as I was doing in the 80s and 90s and just putting it on the roof of our car, and taking it somewhere and just putting it on the street corner? And abandoning these things, and finally, after a few years of doing that, one night at 3 o’clock in the morning, I took them all to Blackfriars Bridge and chucked them in the Thames. [Laughing] Such is the way of artists, you know. It was one of the most liberating things I’d done. [13m15s]

Barlow talks about touch, and how the anticipation of touch is more powerful than touch itself:

I think this issue of touch is, for me, problematic. I think touch is a language, a non-verbal language, and how you imagine touching something seems to me to be more important than actually reaching out and touching it, where the minute you’ve touched it, the mystery, or the imaginative process, gets solved. You know, that’s closure on it.
I think there are…numerous art objects where there is a longing to touch, or an interest in what this thing is. But I think that it’s up to us to work out, what we then imagine what this might be? Is it hot or cold? There are artists who very much play that; Pierre Huyghe made a sculpture that is very much hot when you touch it. I think that’s a sort of fascinating game. I found that work, for me, you know, the minute you’d done that action, I didn’t know quite what else there was to discover about it. [51m00]

Just now I listened to this and the action I thought of was cutting the Barnett Newman painting and the Gursky Rhine. The thought of cutting, and the process of composition, the decisionmaking, the weighing, these all feel vital, and different from the actual chops. 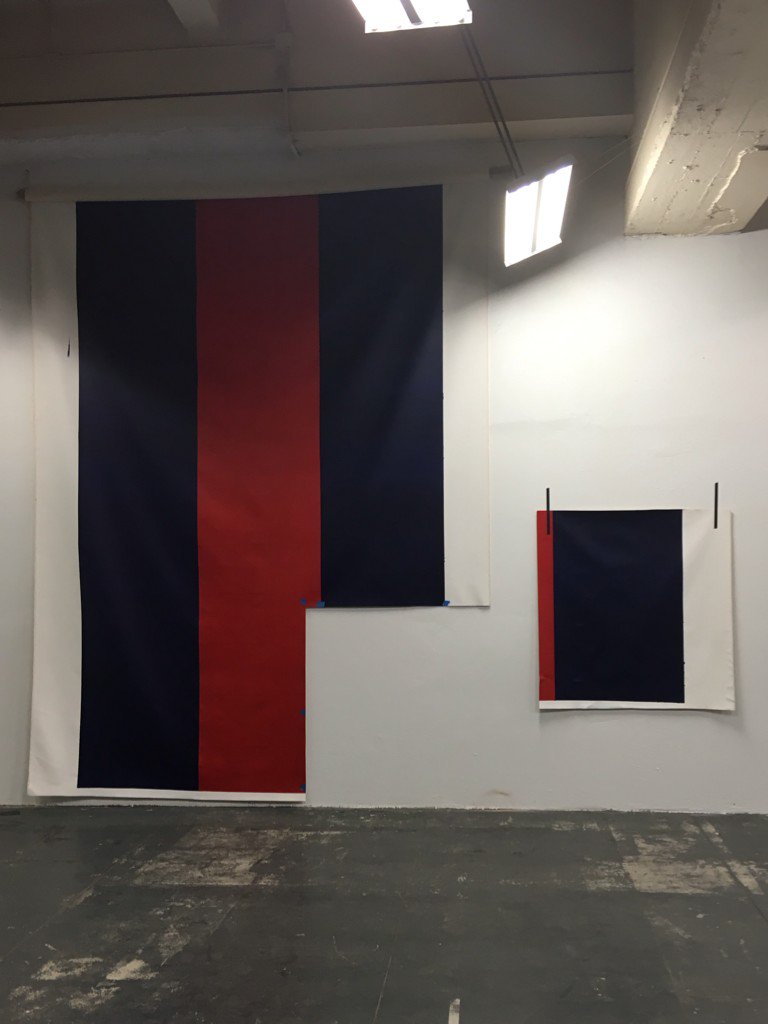 Chop Shop Newman Painting No. 1 [destroyed] and No. 2, both 2016
That experience is reserved for whoever buys it; by design it is not the same experience as the regular viewer. Taking Barlow’s perspective on touch would mean that considering the potential is more interesting. But I think what actually happens is that the decision to cut, crop, compose and define shifts a collector away from just seeing and toward creating. From the audience to the artist.