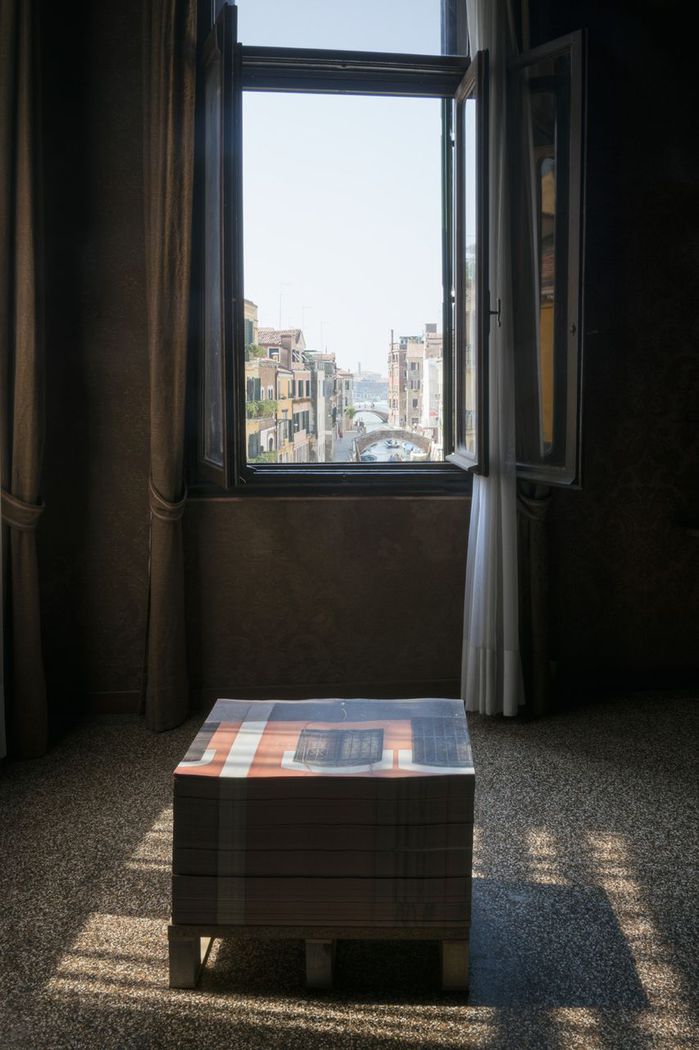 Luanda, Encyclopedic City, installation view, 2013, via beyond entropy
In 2013, Luanda, Encyclopedia City, an exhibition by Edson Chagas at the Angola Pavilion, won the Golden Lion for National Pavilion at the Venice Biennale. It was the first time Angola had participated in the Biennale, and the first time an African country had won. It was Chagas’s first solo exhibition in Europe.
The exhibition comprised images from Chagas’ ongoing series, Found, Not Taken (2009 – ), in which he photographed an object from various cities’ streets in front of a carefully selected background. The curators of the pavilion, Paula Nascimento and Stefano Rabolli Pansera of the firm Beyond Entropy Ltd, selected 23 images of Luanda. 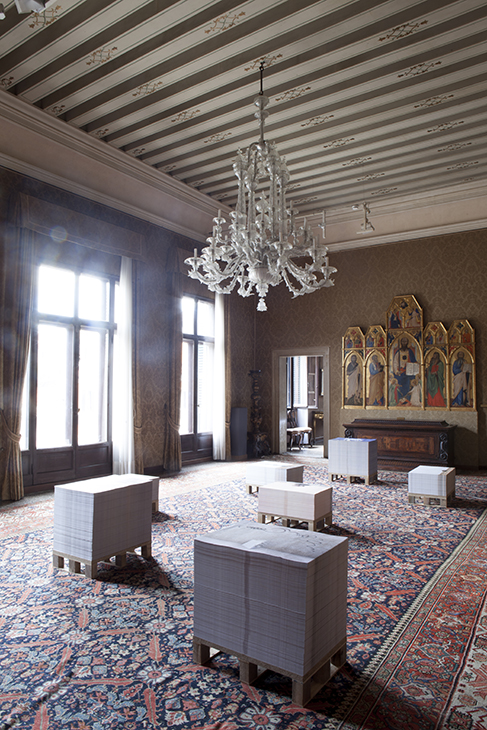 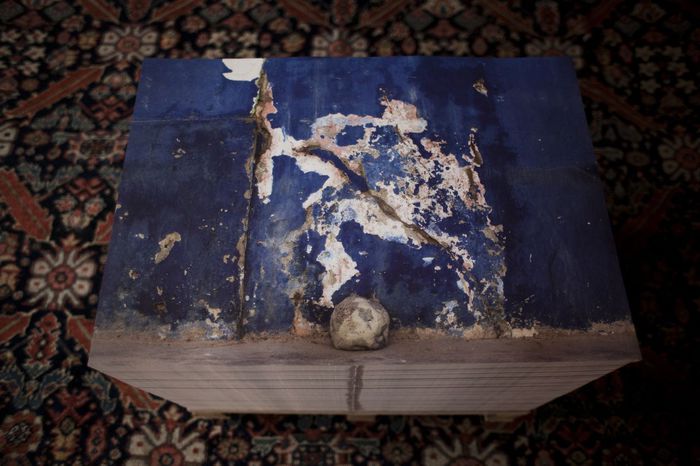 From Found Not Taken, installation of inkjet prints on pallets, title via moma.org, image via beyond entropy
Chagas’s images are appealing, but not groundbreaking. They feel like painterly Gabriel Orozco photos where journalism replaces self-conscious lyricism. What was most striking about the exhibition was its sculptural and spatial qualities. Offset prints of the images were placed in large stacks on pallet-like plinths, providing a stark contrast of both content and form with the palazzo’s ornate galleries and collection.
While I’ve found no mention of Orozco’s work in discussions of the show, the references to Felix Gonzalez-Torres were clear, broad, and abundant. Indeed, it felt like Chagas’s works were the most powerful and effective use of the replenishable stack since Felix put the form on the contemporary map 25 years ago. Beside the bases, one innovation was a large, printed folder, which turned visitors’ sheafs of free prints into a tidy, transport-friendly exhibition publication. 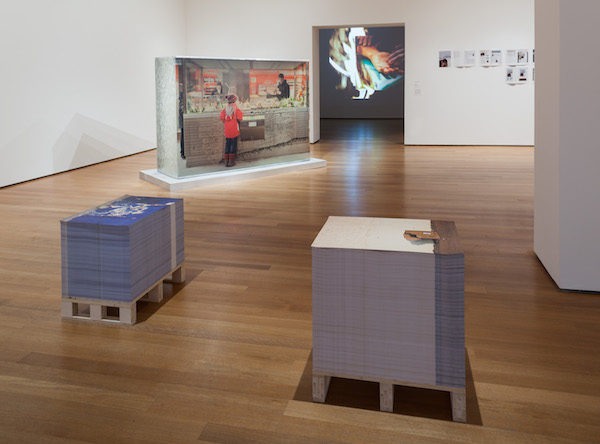 Ocean of Images installation shot with Edson Chagas’s Found, Not Taken, Luanda, 2013, image: moma via aperture
When MoMA included five images from Chagas’ Found, Not Taken series in last year’s Ocean of Images show, they showed the stacks, minus the folder, with the pallets. Or again, pallet-shaped plinths, since the stacks involved actual, non-sculptural pallets, too. The works were now credited as coming from the Founding Collection of the Zeitz Museum of Contemporary Art Africa. [You know what collectors say: biennials before Basel.]
The stacks’ appeal, as Felix knew, is their distributive power. As MoMA’s Kristen Gaylord put it, “they require the interaction of our thousands of visitors, who take them away to hang on a wall, toss in the garbage, or give away, distributing Chagas’s work throughout the world.”
So it’s kind of amazing to find out that the stacks weren’t Chagas’s idea; they came from the graphic designers’ for the Angolan Pavilion, a two-person firm in Venice called Tankboys. In the official press release, the curators were described as collaborating withsomeone called Thankboys on “design and art direction,” but almost no other mention of a Thankboys can be found online. Tankboys, however, Lorenzo Mason & Marco Campardo, lists the pavilion on their un-Googled website:

Our role as designers was to find an adequate setting for the contemporary artworks while also creating a dialectic relationship with the permanent collection present on the site. While observing the space, we have decided to create a physical and imaginary landscape, adding another layer to the location by creating 23 towers with posters of the 23 photographs selected by the curators. The physical structure of the exhibition has allowed us to obtain two goals: we have been able to give shape and structure to the photographs while also creating a physical encyclopedia (as the title suggests) of the artworks displayed. Twenty-three posters scattered around the room, 70 x 100 cm large, can be collected from the piles and bound together using a red cover especially designed (the chosen typeface was our interpretation of Aldo Novarese’s Forma) to hold the prints together.

This is how your Venetian sausage is made. Other of the firm’s projects include finely crafted wood tables, so I assume they created the plinths, too. 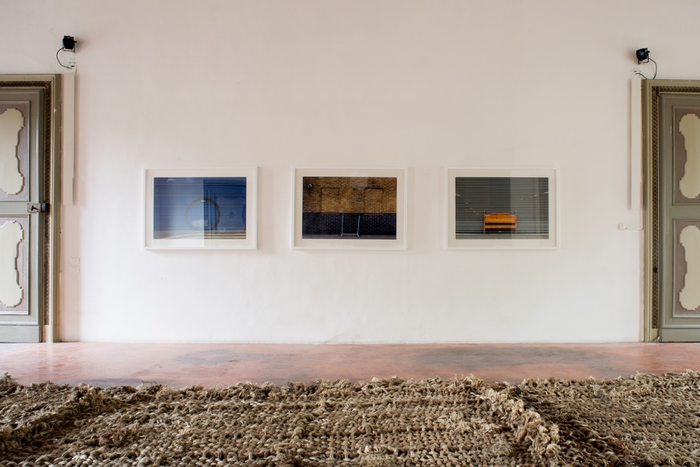 Ibrahim Mahama and Edson Chagas installation view at Palazzo Gallery, 2015
Chagas’ other exhibitions of Found, Not Taken included c-prints of images from the cities where he lived-London and Newport as well as Luanda-framed, editioned, and hung on the wall. For example, in a victory lap after Venice, he had a two-person show with Ibrahim Mahama at Palazzo Gallery where things are framed. The stacks appear to be a direct product of the exhibition conditions in the Palazzo Cini. Which were then bought by the Zeitz and repeated at MoMA. With no mention of Tankboys’ formative contributions at all.
I don’t mean to denigrate Chagas’ images, or to assert he has any less than total claim to authorship of his works. I’m sure Chagas had ample opportunity to consider the options and proposals for presenting his work. But I can’t shake the feeling that I misunderstood the works in Luanda, Encyclopedic Pavilion, and my misperceptions were reinforced at MoMA.
Megan Eardley wrote about Luanda, Encyclopedic City for Africa Is A Country:

Enter Africa, the expert in European fantasies. At the Angolan pavilion, Edson Chagas has crafted an elegant response to the encyclopedic project, which begins with the title of his photographic series. “Found Not Taken,” thumbs its nose at the Europeans who cannot stop carting off the world’s knowledge to its curio shops, laboratories, and museums.

And yet I can’t help but feel it’s the opposite now, that the western art system has safely processed and subsumed another African artist for consumption. Independent curators took a particular, localized tranche of a little-known African artist’s work, and poured it into an instantly recognizable form, one long associated with a canonical contemporary artist, whose work deals with identity and power, and optimized it for propagation at the art world’s greatest curatorial circus, where it wins top prize and spawns hours-long lines. It’s like Venice gave the Golden Lion to itself.
But what about the stack? Can we have stacks now that nod to Felix without being necessarily and only an appropriation? Can they work outside of the high-traffic, souvenir-hunting environment of a biennial or a museum? Maybe when Tankboys grafted Felix’s concepts of print-as-sculpture and the endlessly free, devalued original onto Chagas’s work, they helped create a place for the stack apart from Felix’s legacy. For Chagas’s otherwise unrelated images, the stack functioned as an exhibition device and a publishing & distribution strategy. Maybe the stack can now begin to function as a platform, not just an object, like how Seth Siegelaub’s Xerox Book was at once a book and a show. Maybe. We’ll have to see. [h/t to Paul Soulellis for the impetus to revisit the stack]