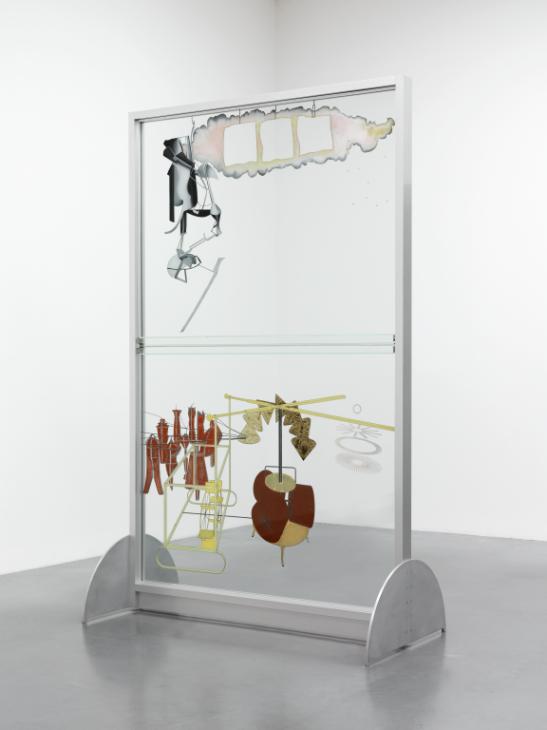 Marcel Duchamp, The Bride Stripped Bare by her Batchelors, Even (The Large Glass) 1915-23, reconstruction by Richard Hamilton 1965-6, lower panel remade 1985″ image:tate
The new issue of Tate Papers is out, and it includes a great article [actually a dissertation chapter] by Bryony Bery detailing the creation, authorship, history, and conservation of Richard Hamilton’s 1965-6 reconstruction of Duchamp’s Large Glass.

The task of organising a Duchamp retrospective outside America posed many problems for Hamilton. A high proportion of the artist’s extant work was fragile, lost, broken or unable to travel, making them, in one sense, prime candidates for replication. Reconstructing Duchamp’s Large Glass was, according to critic Michael Bracewell, ‘a technical and intellectual operation of staggering complexity – at once devoutly, almost perversely concerned with the practicalities of decipherment and craft, yet at the same time inhabiting empyrean realms of psychology, aesthetic philosophy and enacted myth’. Hamilton’s work remains a great accomplishment within twentieth-century art history. As a case study it is also an exceptional example of how replicas have been understood more recently in museums and the implications for conservation treatments today. It represents a prime example of the problems regarding the ethics and transparency of replicas, partly because it has been deemed more successful than other comparable examples. Indeed, as well as offering a new way of looking at or through the Large Glass, this paper has sought to demonstrate that replication itself is an historical problem, and that historical objects pose problems for and in replication.

I’ve been as beguiled by the recreations of Large Glass as I am by Duchamp’s original, not least because Duchamp signed and “certified” the first two-by Ulf Linde and Hamilton-as “copies conformes.” There are others out there, of course, and “as Duchamp expert Michael R. Taylor acknowledged in 1994, ‘there is nothing to suggest that this figure will not increase in the future’.” 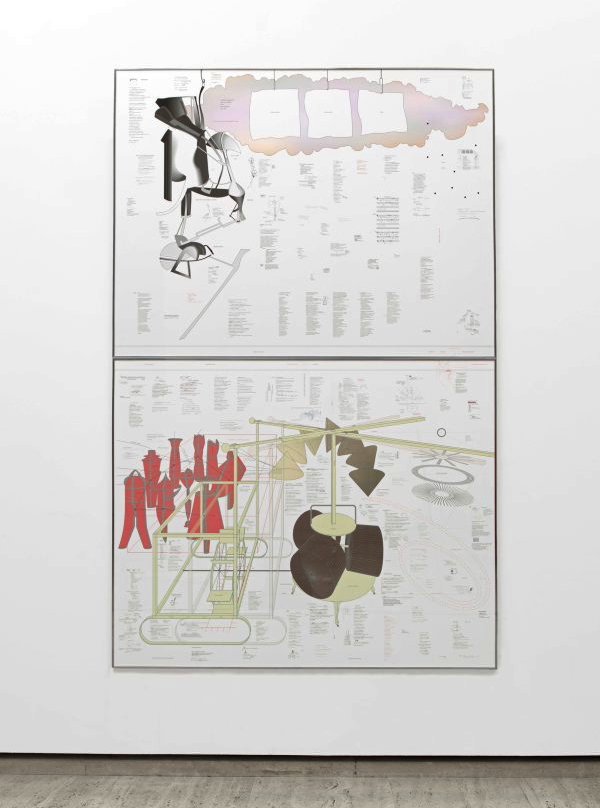 Typo/Typography of Marcel Duchamp’s Large Glass, 2001-2, but really 2003, ed. 5. image cropped from ag nsw
But Hamilton’s effort is singular, I think, for his long involvement with the artist, the work, the process, and the materials surrounding it. Hamilton translated The Green Box, created collaborative glass editions with Duchamp as part of the Large Glass production project. Also, Hamilton’s reproductions of Large Glass were used to create Jasper Johns & Duchamp’s props for the 1968 Merce Cunningham dance, Walkaround Time. And he went on to make full-scale, annotated diagram of Large Glass mounted on aluminum, which are just gorgeous, and which, since the edition of five [plus one, oh wait, there were two more editions of nine and five? what the] was snapped up by museums, I’ve been meaning to recreate myself someday somehow. Heads up, Michael R. Taylor.
Through The Large Glass: Richard Hamilton’s Reframing of Marcel Duchamp [tate.org.uk]
Typo Typography A Collaborative Print Studio Project [justpressp]
Previously, related:
Pour Copie Conforme
Johns, Merce, Duchamp: Walkaround Time
On Googling Richard Hamilton’s Map of Palestine