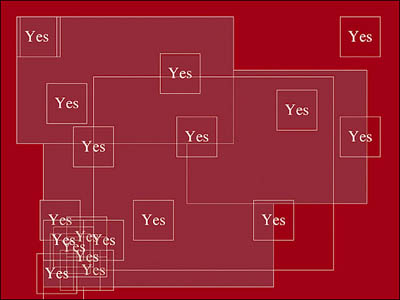 As a PowerPoint geek, exploring the software’s implications is, like fresh breath, a priority in my life. [Cf. PowerPoint as a Creative Medium, which has additional ppt examples and articles.] A couple of months ago, Byrne gave a few of us a tour of his gallery show at Pace McGill, where they pre-released his hypnotic PowerPoint book/DVD, E.E.E.I. (Envisioning Emotional Epistemological Information). Good stuff.
And before you leave the Times‘ place, why not look over my article on video art bootlegging.