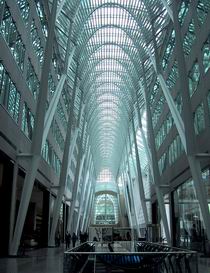 On Slate, Christopher Hawthorne writes about Santiago Calatrava, architect of the transportation hub, um, slated for the WTC site. Hawthorne’s got good architectural sensibility, but I think he’s wrong to worry about Calatrava ignoring the context of his projects. True, many of Calatrava’s flashiest designs look like they’re sitting on a giant dining table, like an overwrought centerpiece, but that’s what he’s been asked to do.
While I haven’t been to the Milwaukee Museum, Calatrava’s pavilion may signal a Bilbaoist nadir; pictures of it make it look both pointless and useless, like the pyramid without the Louvre. But Toronto’s Heritage Square is one of the best public spaces in town. Calatrava carved it out/knitted it together from the interstitial spaces of various downtown buildings, and it’s beautiful. Even if it doesn’t blend in, his Zurich station, too, inhabits its site well.