OK, before I talk about how seeing The Cremaster Cycle straight through changed my understanding of Matthew Barney’s work, let me get a couple of things out of the way:
1) FLW didn’t design those theater chairs to be sat in at all, much less for eight hours in one day Aggressive, non-user-centered architecture should be taken out and shot.
2) Best overheard comment after Cremaster 1, when a guy at a suddenly partially visible urinal complained that the mens room door was being propped open by the line: “We just spent 45 minutes in someone’s ovaries. I’m sure no one cares about seeing you take a piss.”
3) I don’t know what country you’re from, and frankly, I don’t care. On this island, we keep our hands off the freakin’ art, especially when there are signs and guards at every piece. And if you pull the dumb foreigner shtick every time a guard tells you not to touch something, I’ll bust you again.
3.1) I swear, between this show and the MoMA QNS opening, I may never loan anything I own to a museum again.
3.2) What really makes me mad, is that now I’m all jingoistic, when I should just be anti-B&T. Oy, the world we live in… 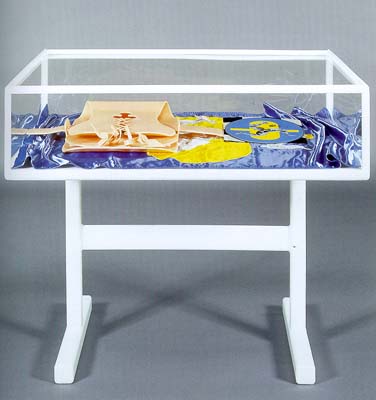 Net net: Matthew Barney’s films are worth seeing, again, and in order. They’re the strongest expression of what he’s doing. He may call himself a sculptor, but that’s just a numbers game. He clearly exerts phenomenal time/effort/thought on materials, objects and spaces; but the experience of his sculptures pales to that of the films (and the experience of sculpture-in-film). Likewise, his drawings–which are small, precious, slight, almost invisible–get subsumed by their giant sculpted vitrines.
An extremely useful/interesting educational aid is The Gospel Cremaster Cycle (According to Neville Wakefield), an exhaustive catalog/glossary which functions like an encyclopedia of Barney’s universe. It weighs like a hundred pounds, though, so plan be home when it ships; you don’t want to carry it back from the post office (or the Guggenheim, for that matter).
There are a few exceptions: I found the flags and banners interesting, and some metal objects (e.g., the Masonic tools from C3) are exquisite. The mirrored saddle is in a class by itself (yeah, there are at least two, but only one’s on exhibit). [An art market side note: I don’t know, but a significant number of the C3 work is large, institution-sized, and all “courtesy Barbara Gladstone Gallery,” almost as if it’s a showroom for out-of-town curators. All that’s missing is a “to the trade only” sign in the window.]
As for the photographs, which I’d liked best going in, most feel inexplicably lifeless compared to the films they came from. Barney can create absolutely stunning images, but they’re on film, where stunning often morphs into mesmerizing. It’s telling that while the photos reproduce very well, I could only find one image of a Barney vitrine online–from an auction report; even though they’re display cases, these non-filmic sculptures seem innoculated against reproduction.

The films hold up very well, but as film-as-art, not art-as-film. Consecutive viewing (as opposed to the in order they were made) strengthens both their thematic/narrative and their visual impact. I was surprised to realize how many elements are from Barney’s own life/world/story; it was unexpectedly personal, as opposed to issue/metaphor-driven.
In his review, J. Hoberman says that the press screenings for the whole Cycle were sparsely attended; he (like everyone else, he concludes) prefers the ambient, less demanding mode of watching a few minutes on the gallery flatscreens. “One scarcely staggers from this six-and-a-half-hour magnum opus inclined to proclaim the second coming of David Lynch�or even Julian Schnabel,” he writes, in full “when you’re a hammer, everything looks like a nail” mode.

Which makes Barney’s claim to be a sculptor, not a filmmaker, relevant. He’s asserting his identity as an artist. Cremaster 2, which Hoberman slammed the hardest as a film, is one of the most haunting and beautiful works of art I’ve seen. Jeremy Blake told me Paul Thomas Anderson had asked him, “Man, why do artists have their heads so far up their asses sometimes?” “They like the smell,” Jeremy deadpanned. “But seriously, it’s introspection. Contemplation. You should try it sometime.”
In my budding filmmaker mode, I had had some of the same complaints as Hoberman (ie., simplistic camera angles, AWOL editing), but his glib dismissal of Cremaster says more about the diminished expectations and limits of film. Sure, movie directors think they’re God, and Barney’s conjured up a complete, system of symbols and myths that’d make the Catholic Church proud. Whether that means he thinks he’s God, Jesus, or the Pope, I can’t say, but at least he isn’t the second coming of Julian Schnabel.