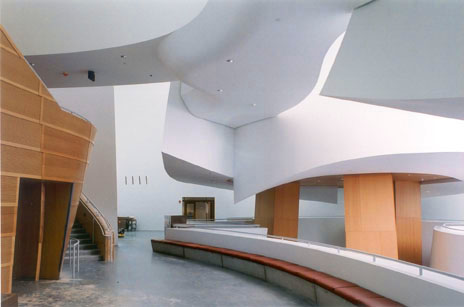 It took police more than seven hours to shoot and capture the gunman who opened fire in the newly opened Peter B. Lewis Building for Case Western’s business school. It was “almost a cat and mouse game,” said Cleveland Police Chief Edward Lohn. Why so long? “As the SWAT team entered the building, they were constantly under fire,” Lohn said. “They couldn’t return fire because of the design of the building. They didn’t have a clear shot.”
The design, of course, is by Frank Gehry, an architect whose work has never been described as “SWAT-team-friendly.” [Since when is “designed to give a clear shot” considered a desirable building feature?! -ed.] Gehry was brought in by Lewis, Cleveland’s biggest philanthropist (except when he’s cutting off all the cultural organizations in the city and calling for the replacement of CWRU’s entire board. Another story.), to work a little of that Bilbao magic, to create an instantly recognizable architectural signature, an icon, his (Gehry’s? or Lewis’s?) own Fallingwater. [Insert Falling Ice joke here.]
In a moment of Any Publicity is Good Publicity, perhaps, Cleveland’s mayor gloated of the city’s newest signature architecture: “This building now becomes a homicide site,” a backhanded reference to Bilbao, Spain, where Basque terrorists failed to blow up Gehry’s Guggenheim building (with grenades in flower pots in Jeff Koons’ Puppy actually. Bilbao still wins on style. Another digression.) 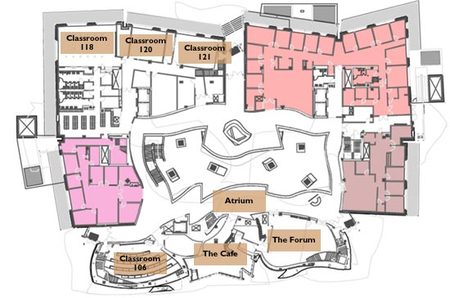