Them’s fightin’ words. In his Cinema Militans Lecture, Greenaway thought he’d rile up his audience at the Netherlands Film Festival with his opening, “Cinema died on the 31st September 1983.” (Killed by Mr. Remote Control, in the den, if you must know.) But it’s his claim that Viola’d trump Scorsese that’s the real “they bought yellowcake in Niger” of this speech. He’s just got Britishvision, distracted like a fish by a shiny object passing in front of him [Viola‘s up at the National Gallery right now.] And the conveniently timely evidence he cites seems, well, let’s just say we know from conveniently timed evidence over here. 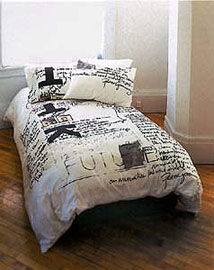 Sleeping with the enemy: Greenaway
texts up a set of bed linens. for sale at bonswit.com
Greenaway argues for a filmic revolution: throw off the “four tyrannies” of the text, the actor, the frame and the camera, banishing at last the “illustrated text” we’ve been suffering through for 108 years, and replacing it with true cinema.
The Guardian‘s Alex Cox sees video games and dvd’s rising up to answer Greenaway’s call, and he makes the fight local, pitting Greenaway against the British Film Establishment, as embodied by director Alan Parker. So the choice is either Prospero’s Books or The Life of David Gale?? This fight’s neither pretty nor fair.
Also in the Guardian: Sean Dodson’s report on a Nokia-sponsored campaign for the new future of cinema, a “festival” of 15-second movies to watch on your mobile phone. It’s part of London’s excellent-looking Raindance Film Festival, and it embodies perfectly the military industrial telecom entertainment complex’s idea of revolution through perpetual hardware upgrading. [It should surprise no one that the little festival is at Nokia’s website, because you can’t actually download movies on your phone yet. Utopia’s always just around the corner.]

More than rallying the troops, Greenaway and Nokia are actually tottering to catch up with the next generation. Paul Thomas Anderson’s inclusion of Jeremy Blake’s animated abstractions in Punch Drunk Love. The Matrix Reloaded‘s all-CG bullet time “camera.” The Matrix launching the DVD player, for that matter. Gus van Sant’s Gerry as film-as-video-game and the multiple POV reprises of scenes in Elephant. Multi-screen master Isaac Julien, Matthew Barney, spawn of Mario Brothers. And the unscripted cinematic narrative mutations of corporate-sponsored mediums like PowerPoint and AIM buddy icons.
Greenaway’s righter than he knows, but the evolution’s already underway, with or without him. It always has been