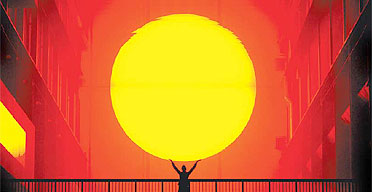 This is the last weekend to see Olafur Eliasson’s installation, The Weather Project in the Tate’s turbine hall. The museum’s keeping the hall open until 1AM on Friday and Saturday, apparently because they’re unsatisfied with only 2 million visitors.
For added enjoyment, the Guardian published a diary from the Tate’s manager, the one who had to deal with troupes of Santas, didgeridoo players, a man in a canoe, and people hooking up under the mirrored ceiling.
[3/20 update: Michael Kimmelman interviews Olafur in his Berlin studio about TWP. Re the headline, the Arts & Leisure section closes on Tuesday night. Great minds, etc., etc. “The Sun Sets at the Tate Modern]