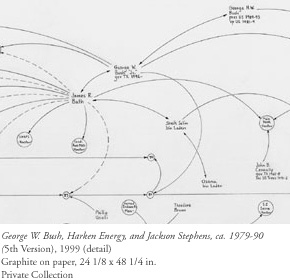 Wow. There’s opaque and then there’s opaque. The Drawing Center was selected to join The Freedom Center in one of two cultural buildings planned for the WTC Site. Their building will adjoin the WTC Memorial, while the other two cultural organizations–The Joyce and Signature Theaters–will share a performance center across the street.
I’m a huge fan of The Drawing Center, as much as the aggressively unassuming, rather esoteric, old-school SoHo gallery can engender huge fandom. But how in the world did the LMDC come to the decision to put them next to the sure-to-be-corporate-slick American Freedom Experience? Is there some backchannel connection?
If only the artist Mark Lombardi were still alive, he could explain it to us. Lombardi’s intricate drawings traced the webs of corruption, power, and influence that spun out of major scandals like the BCCI bank collapse, Iran-Contra, and, ahem, “George W. Bush, Harken Energy, and jackson Stephens ca 1979-90.” That’s the title of the 1999 work above, which was included in the first major retrospective of the late artist’s career–held at The Drawing Center last fall.