Last night while I was rendering some footage in Final Cut, (“Estimated time: about 2 hours…”) I decided to watch the short films in Nike’s Art of Speed series.
The 15 filmmakers were asked to “interpret the idea of speed.” Well, by the end of the first film, David Ahuja’s Obstacle Course, MY idea about speed was, “Damn, I need a faster processor!” WMP generated so many video artifacts, Ahuja’s film ressembled a futurist painting. As the camera followed the running protagonist, the primary-colored objects in the background created jagged smears across my little video window. The guy would stand up, the video would freeze, and suddenly I’m looking at a pixelated motion study photograph straight out of HE Edgerton. Which, considering what I was watching, worked out just fine.
The Futurist Manifesto declared “that the splendor of the world has been enriched by a new beauty: the beauty of speed. A racing automobile with its bonnet adorned with great tubes like serpents with explosive breath … a roaring motor car which seems to run on machine-gun fire, is more beautiful than the Victory of Samothrace.” [Umm, what’s that goddess’s name again?]
Moving to my other machine, I watched Obstacle Course as Ahuja intended. And there were still artifacts, this time by design. Digital palimpsests of the character’s movement through space. They were the kind of 1970’s video effect popularized by the likes of WGBH, the public TV station where many video art pioneers first explored the possibilities of technology. WGBH, which was also the home of ZOOM. [O-2-1-3-4 ]
Ahuja’s film was sweet, and my streaming epiphany endeared me to it, but by the sixth hyper-aestheticized, digitally altered racing film, I wondered if the fix was in. Directors’ attempts to portray the abstracted or metaphorical notions of speed that exist (presumably pure) in their heads too often ended up showcasing the chosen technology or technique instead.
This, too, may be by design, though. Art of Speed was coordinated by the interactive & effects agency RG/A; given all these render-heavy images, maybe processor cycles are the most relevant measure of speed here. 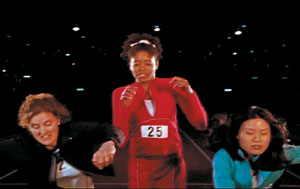 Then I saw Honest’s documentary-style film, The Shortest Race, in which they follow an entire actual competition, from the athletes’ deadly serious pre-race strategy soundbites to the winner hoisting a giant check on the podium. The race itself–a 1-meter dash–pokes fun at the sheer arbitrariness of modern athletic contests. Yet it also distills and preserves both the thrilling challenge that comes from competing and the suspense that comes from watching. Hell, it makes more sense than cricket. This is subversion Nike won’t break a sweat over. Or they will. While they’re running.
[update: AOS posted an interview with the Honest team, Jonathan Miliott and Cary Murnion.]