So you’re saying, if you suspend habeas corpus and pre-emptively arrest hundreds of pedestrians, I’ll be able to drive my Mercedes [sic] to the Upper East Side from the Holland Tunnel in 10 minutes every day? I have to confess, it’s a seductive proposition.
[First they came for the carless, yet I did nothing…] 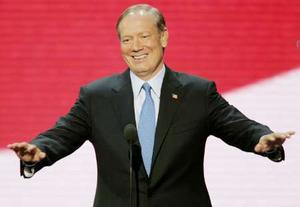 And while I’m watching the giant flag behind George Patton Pataki–It’s rippling!– I’m thinking, “gots to get me one of those 3-story high monitors.”
[Then, they came for the flatscreenless, yet I did nothing…]
Then, when the guy who plays the Giuliani-style right-wing DA on L&O starts narrating a Bush video–I’m all, ah, a slide show; the resolution on that monitor probably can’t handle full motion–the photographs seem strangely alive, with an intensified depth of field. And movement? Naw… 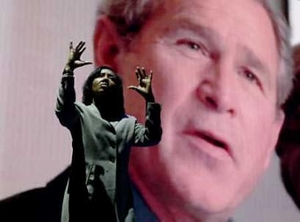 Oh my hell, talk about seductive. This full-blown cult of personality film is using a more sophisticated version of the entrancing photo-animation technique developed for The Kid Stays in The Picture, the ultimate self-deluded, “so seductive who care’s how much of it’s true” Hollywood insider documentary. They’ve turned Robert Evans and Graydon Carter against themselves–and the whole celebrity-worshipping country–and made them bow to George W. and His Will.
[Then they came for the DVD-less, yet I did nothing…]
Scott Sforza, you are truly worthy to be called the Leni Riefenstahl of your generation.
[And then they came for me, and there was no one left.]
Dude, I really wish you’d skip right to making movies about fish.