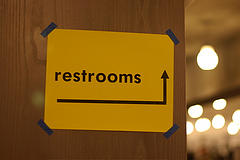 KINKS: The way-finding isn’t working. By the second or third day, we had to put up signs to help people. The bathrooms needed signs coming out, instead of being flat on the wall. The library’s organization makes complete sense to us. But for the public, it’s not obvious. One portion of the seventh floor is six feet higher because it spirals around. So if it says something is on seven, what does that mean?

“A lot of employees are pretty upset that a lot of money was spent on the award-winning design but little was spent on things like water and restrooms,” said Stephen Beck, a consultant with the Professional Engineers of California Government union.
The 13-story, 716,200-square-foot structure has four drinking fountains, all on the ground floor. And at each end of each floor there are two bathrooms, one for women and one for men. The problem: only four urinals on each level.

-From the LAT article on complaints about Thom Maynes’ ecstatically reviewed Caltrans building.