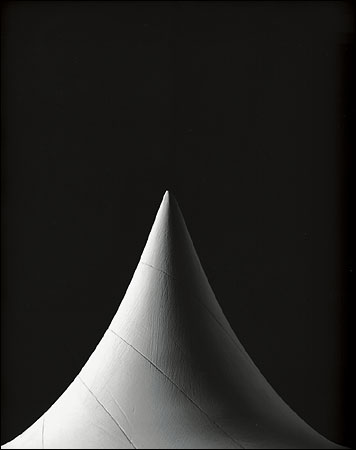 Although Gustav Eiffel didn’t explicitly use one himself, an American engineering professor has come up with a mathematical expression for the shape of the Eiffel Tower, based on its creator’s own studies of wind resistance, torquing, and load transfer.
Which reminds me of the photos by Hiroshi Sugimoto at the Fondation Cartier, Mathematical Forms. They are monumental images of beautiful, little plaster stereometric models, which were created in 19th and early 20th c. Germany to illustrate complex trigonometric formulas. Several were published in the NY Times Magazine last month.
Elegant shape of Eiffel Tower solved mathematically [PhysOrg.com, via archinect]
Etant Donne: Le Grande Verre by Hiroshi Sugimoto through Feb. 27 at the Fondation Cartier
Hiroshi Sugimoto’s Mathematical Forms [NYT Mag]