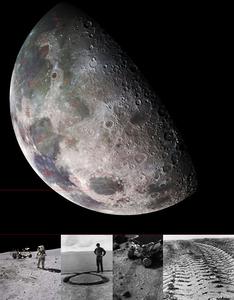 Another cover from Life“the lunar surface photographed by the Apollo astronauts in 1969” yields a comparison to Smithson’s cover for Artforum published just a month later: a distribution of mirrors across a square of parched earth, one of a number of illustrations from his “Incidents of Mirror-Travel in the Yucatan.” Placing these images together, which speaks to an argument about travel as a form of cultural repetition that suspends an experience of the present, demands a great deal of archival legwork on Reynolds’s part.

-Pamela M. Lee writing about new books about Robert Smithson in “The Cowboy in the Library,” published in the Dec/Jan 2005 Bookforum. She’s referring to Ann Reynold’s 2003 book, Robert Smithson: Learning from New Jersey and Elsewhere, which draws intensively and creatively on Smithson’s archives at…the Smithsonian.
The image above is Moonworks, artist Craig Kalpakjian’s 2003 proposal for creating earthworks on the moon. Read about it in Issue Magazine. Craig’s got a show up through Saturday at Galerie Edward Mitterand in Geneva.
Lee continues:

In one of the most striking passages of art history I’ve read in a while, Roberts connects a Mannerist altarpiece Smithson studied at length with the abstract sculpture he began making in the mid-’60s, by bridging a discussion of Jacopo Pontormo’s Descent from the Cross, 1525-�28, a deposition image composed around the rotational forms of its sacral actors, to the spiraling forms and crystalline structures of works such as Gyrostasis, 1968. What connects them in Smithson’s oeuvre, Roberts argues, is their attitude toward the deposition of time: Pontormo’s languorous Christ now exhibits a “depositional temporality,” whereas the growth process of a crystal is itself called a “deposition.” It says something about Roberts’ gifts as a polemicist that she can make this leap wholly convincing for the reader. More art history should be written with the kind of imagination and verve displayed here.

Roberts is Jennifer Roberts, who wrote Mirror-Travels: Robert Smithson and History. Smithson’s sculpture Gyrostasis was recently on view at the Hirshhorn.