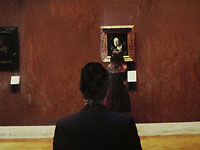 I can’t quite say why, but I had a pretty intense Jon Jost phase when I first moved to New York. I saw his All The Vermeers In New York several times, lured in by the title, but kept there by the film’s demanding and precise construction, and its underlying art-vs-money themes. [That said, I don’t remember it too well; better add it to the rental queue.]
Anyway, I’m sure–pretty sure. kind of sure. hoping–that when the Whitney Museum put then-Vivendi/Universal chairman Jean-Marie Messier on its board in the late 1990’s, it was NOT it in the hope of adding one more Vermeer to New York City’s collection.
FBI looking at Messier as part of its investigation of the Isabella Stewart Gardner Museum theft, which netted someone a Vermeer and some Rembrandts [bostonherald.com]
All The Vermeers In New York[imdb.com, amazon]
FYI, New York’s Vermeers are at the Met [5] and the Frick [3]