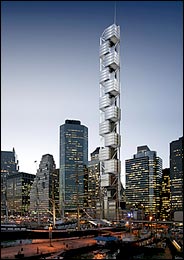 According to the Curbed Theory of NY Media Darling Architects, full-force Calatrava-hatin’ should’ve kicked in in January. But here it is April, and there’s a snuggly celebration in the Times by Robin Pogrebin, and it’s got subtexts packed so tight, I can’t figure out what the real story is:
It’s what New York’s all about, baby: reinvention “he considered himself more an artist than an architect.” Really? Because he used to be “the bridge guy, the engineer who also did architecture.”*
Can you believe it, he’s in a museum show! In NYC!: True, Sandy does have a show coming up at the Met six months from now. Odd that there’s no mention of his MoMA shows, either last year’s “Tall Buildings” or that little ol’ one-man show in 1993. Or the Municipal Art Society’s St John the Divine exhibit that debuted his first NYC project.
$45 million condos at the Seaport don’t sell themselves, pal: I think we’re getting warmer. Says connoisseur/condo developer Frank Sciame, “Standing there in front of his sculpture, that’s how this started.” Or as he puts it in Absolute magazine, “In addition to being a work of art… it will also be a place to live.”
He’s the only thing right about the WTC site: Ah-ha. “It helps us immensely to have someone give us a solution that is workable from an engineering point of view, as opposed to just an architecturally beautiful feature.” Translation: Thanks for playing, Danny. There are some lovely parting gifts for you on the way out.
See, if only we’d let the Port Authority make every redevelopment decision for the WTC site unilaterally, we’d be much better off. Ahh, I’m inspired already.

An Architect Embraces New York [nyt]
Calatrava’s Tower: Even More Egregiously Expensive! [curbed]
* like the suit who calls himself a filmmaker but ends up writing all the time has room to talk.