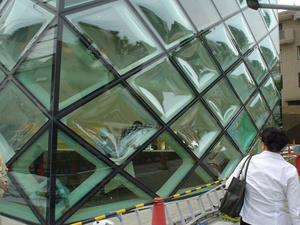 A report from the Herzog & deMeuron-designed Prada store in Tokyo’s Minami Aoyama neighborhood. I have some good news and some bad news.
First the bad news. It was reported earlier that the store smelled like feet cat urine. It appears this is no longer the case. The white carpets seemed freshly–and repeatedly–shampooed, which may explain the lack of odor.
Also, I saw no evidence to support reports that the windows were cracking and popping out, and that the clothes were fading at an excessive rate.
Worst of all, it’s actually quite nice, much nicer than the Rem Koolhaas fiasco, anyway.
Now the good news: we were the only customers in the store during the entire time we were there. Also, the kid’s all-terrain stroller left calligraphic trails in the untrodden carpet.
Prada Tokyo images at Dezain.net
previously: “damn, but that company pisses me off.”