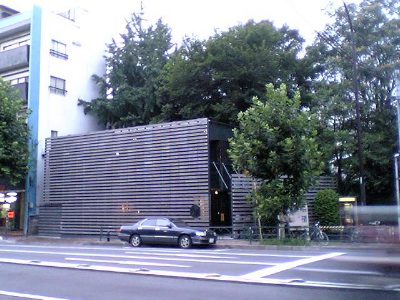 Near where we’ve been staying in Tokyo is this striking building, which I had to check out. The screen-like facade turns out to be cinder block-colored bricks set on end in a blackened steel frame. A meter back is the entry courtyard and the stark glass box of the restaurant, which feels suspended in the thick forest behind it. Of course, it’s on a busy corner of a major street (gaien higashi-doori, if you’re coming).
The restaurant is called Waketokuyama, and it’s apparently the Per Se of Tokyo, from the stunningly simple cuisine made with super-fresh ingredients, to the difficulties of getting a reservation. We’ll still look into eating there, but it was the architecture–by Kengo Kuma–which first caught my attention.

Kengo Kuma and Associates [kkaa.co.jp, such a big browser window for such little pictures]