Well, things could certainly be worse, but I’m pretty fed up with the achingly nostalgic, self-appointed populist heroic, knee-jerk MoMA-hating that passes for an enlightened, progressive cultural standpoint in certain quarters of New York these days.
James Wagner takes it personally and politically when PS1 won’t let him shoot images of the Greater NY show. The MoMA Man holding him down. Sure, it puts a cramp in your photodiarykeeping to not be allowed to take pictures, but please.
PS1 generally, historically–and GNY particularly, famously–is a seat-of-their-pants, chaotic circus. Photo release language in the lending documents–assuming there even ARE lending documents–is exactly the kind of thing I’d expect to slip through the cracks there. Little harm, little foul.
And as for those works being lost forever because you couldn’t snap’em? I thought the conventional wisdom about GNY was that everyone in it was already discovered, represented, and getting famous already. I thought up half a dozen artist names in the show and found images of their GNY work and more on their galleries’ websites. It’s more time-consuming than uploading from a digital, but that’s about it.
The one that really bugged, though, was critic/polymath Terry Teachout’s sob story of his visit to MoMA last Friday, how it’s a crowded mall now, not as good as Cleveland or as conducive to artviewing as the Met. Well, I happened to be at MoMA last Friday, too–I had a meeting there earlier in the day–and not only didn’t it suck, experience-wise, it was actually nice, and there were some revelatory art moments the likes of which Terry apparently couldn’t be bothered with, because he was bitching about the escalators too much.
1) The “mall” escalators are not a core element of the Taniguchi design, but they can be a core element of a visitor’s experience there if you choose them to be. First, they’re 1% the mall that Cesar Pelli’s escalators were. Remember those? Second, the stairs are not only less crowded, they’re highlights of the spatial experience. If you want a contemplative visit, leave the escalators to the tourists and take the stairs.
1a) In fact, the staircase Terry complains Diebenkorn has been shunted to is one of the most sublime elements of the whole Taniguchi building. 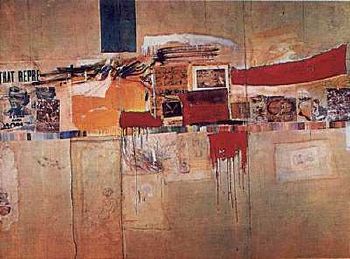 2) Terry’s right about the Monets; they’re finally in a gallery where they belong. But he has not a word for what replaced them: giant Cy Twomblys that have never looked better than they do right now, alongside the Museum’s latest purchase, Rauschenberg’s giant Rebus. As an awestruck friend pointed out to me, Twombly and Rauschenberg were hooking up at the time Rebus was painted, so putting the two artists side by side again–and making you think about where that scribbling on Bob’s canvas came from, or as I rephrased it, “You’re wondering where Cy’s hands were?”–is at once hilarious and important. That painting, as my friend said, is “the best $30 million spent on art this year.”
to PS1: but they’re called the visual arts, aren’t they? [jameswagner.com]
One Big Blockbuster [about last night]