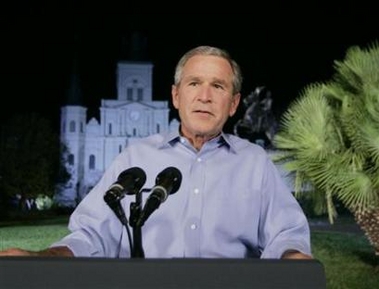 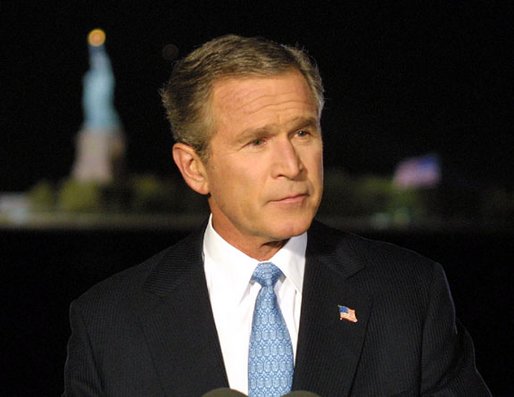 Scott Sforza: I’m gonna put these giant spotlights here in New Orleans, just like I did with the Statue of Liberty on 9/11/02, and if you think the next three years won’t be a half-trillion dollar sinkhole of devastatingly corrupt cronyism, too, it’s your own fault.
[update via TPM: In other lighting news, Brian Williams reports the lights came on for the first time last night in the Warehouse District –from about 30 minutes before the Bush motorcade passed by until about an hour after it left.]
[update, Wonkette has Elizabeth Bumiller’s tour of the set for the pool report:

“Bobby DeServi and Scott Sforza were on hand as we drove up about 8 p.m. or so EDT handling last-minute details of the stagecraft,” Bumiller wrote. DeServi is the White House’s chief lighting designer; Sforza is in charge of visuals.
“Bush will be lit with warm tungsten lighting, but the statue [of Andrew Jackson] and cathedral will be illuminated with much brighter, brighter lights . . . like the candlepower that DeServi and Sforza used on Sept. 11, 2002, to light up the Statue of Liberty for Bush’s speech in New York Harbor,” she wrote.
“Here’s a quote from DeServi on the lit-up cathedral: ‘Oh, it’s heated up. It’s going to print loud.’ “]