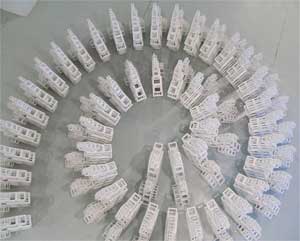 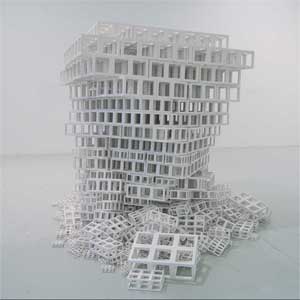 When I first met John Powers five+ years ago, he was like a Tibetan monk with a pile of sand. Only instead of sand, he had thousands of 1-inch woodblocks, which he transformed into a huge, impossibly intricate, mandala-like sculpture that sprawled across the floor of Exit Art’s gallery. Every day throughout the exhibit, he scooted around on a little skateboard chair, replicating and altering dense patterns of blocks as he went. The work wasn’t “finished” when the show ended, and he swept the whole thing away, but that, I think was part of the point.
Now, in his latest show at Virgil de Voldere Gallery in the Chelsea Arts Building, Powers is reconfiguring hundreds? thousands? of white, Sol Lewitt-like grid modules into a new sculpture every day. The gallery’s website has pictures of the ones you’ve missed, but you can also stop by until Oct. 9th to watch new pieces come together.
John Powers at Virgil de Voldere through Sun., Oct. 9 [virgilgallery.com]