White House Productions ordered up this backdrop for use at GWB’s hotel press conference.

As the camera angle in the BBC screenshot above shows, the “China” & “Beijing” characters are perfectly placed to flank GWB’s talking head (in the TV camera’s frame). 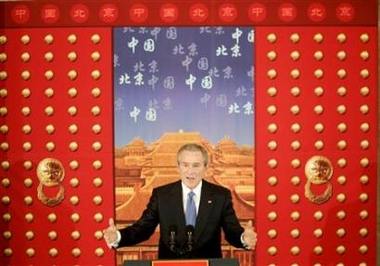 The trompe l’oeil gates and knockers–they’re copied from The Temple of Heaven–complete the backdrop, and provide an exit “backstage.”
According to wikipedia, the Emperor would visit the Temple of Heaven each winter to make elaborate ceremonial offerings. “It was widely held that the smallest of mistakes would constitute a bad omen for the whole nation in the coming year.” Fortunately, no one believes that kind of superstitious mumbo jumbo anymore…
No exit, stage right. 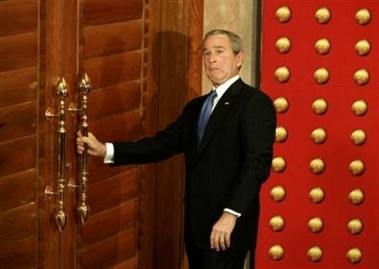 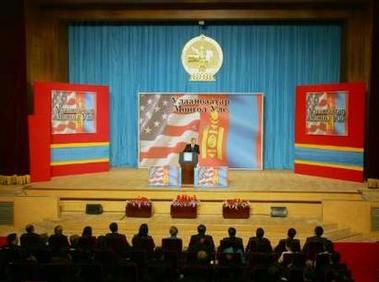 To see what a barebones Sforzian Backdrop set-up consists of, check out this wide shot of GWB on stage in Mongolia [addressing the Mongolian parliament who, it turns out, meet in the auditorium at Ulan Bator High]: one head-on and two profile backdrops, and then 2-3 setups from the side and below–note the panels in the foreground next to the podium and the little planter/flag thingies below that. I wonder if that pendant hanging above center stage gets into those photos from below?
Also, Mongolian Dutch photographer Iwan Baan was on hand the official photographer for the Mongolian president during Bush’s visit, and his images capture a lot of the backstage activity that is normally invisible in the work of the wire service journalists.
Some highlights: a Mongolian TV crew’s ancient 35mm Arriflex 35BL camera; knots of cameramen perched on the ridge to get wide shots–as if the Mongolian landscape demanded anything less; the Secret Service-issue Porta-potty, surrounded by Mongolian horsemen; the meticulous set dressing, presumably Mongolian-driven symbols of hospitality–the wrapped candy showed up here as well; and the suspicious glances of security agents toward the random Baan, who gets pretty close in to Rice. [Rice & Baan. heh.] The whole thing looks like a visit to the set of a Kurosawa film. I’m thinking Ran, Kagemusha, or Dersu Uzala.
[update: thanks to Iwan for the corrections, and to Chris for ID’ing the Mongolian crew’s camera: “heavy as shit and none too quiet, either,” he points out.]