Unless this was somehow the on-message Backdrop for the day. Let’s go to the tape. Look at this wider shot, where the pre-existing monitors have been used for the Backdrop. 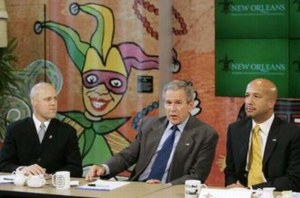 Somehow, this was intentional. Maybe that capuccino-skinned jester was supposed to read as Mayor Nagin? I don’t think it came off that way, though.
[image ap/evan vucci via cbc.ca, and eyeteeth]