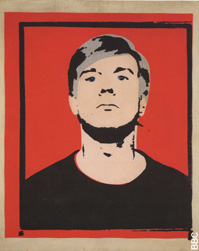 Finally, someone’s saying something about the inconsistencies, conflicts and caprices of the Warhol Authentication Board, which is wreaking quiet, opaque havoc on the market for Andy Warhol’s artworks. The BBC is showing a documentary on the Board tonight on BBC1 called “Andy Warhol: Denied”.
The above self-portrait, from 1964-65, for example, which Warhol gave as payment to Richard Eckstract, an important collaborator in Warhol’s films, was subsequently declared inauthentic.
Is this a real Warhol? [telegraph.co.uk via boingboing]