I’ve been a big fan and collector of Hiroshi Sugimoto’s work for over 13 years now [wow. Typing that just now makes me hyperaware of the passage of time, which is par for the course for Sugimoto.] So when I had a chance to meet the artist at a preview of his retrospective show at the Hirshhorn yesterday, I jumped.
It’s really quite a gorgeous show; stunning, even, which I think is atypical of Sugimoto’s work. For all his conceptually driven series, he’s always produced extremely beautiful photographs, don’t get me wrong. And in the last few years, I’ve seen references to the importance of the old-school technical aspects of photography as well. I’m wary of reading it too much as a “Japanese” sensibility, too, even though the Japanese tradition of modernism and minimalism really is a worldview apart from that of the West; but it’s seductively easy to fall back on the myth of the Inscrutable Oriental–or worse, the pathetic, westernized Pop Zen–when praising his work.
Still, let’s face facts: the man has photographed an icon of Buddhism in Kyoto [the sanjusangen-do temple], he’s designed a Noh stage and a Shinto shrine, and his longtime profession has been a dealer in Japanese antiques. And you can’t get much more self-consciously Japanese than all that. But maybe it’s like being an American in Paris being a Japanese in New York; your awareness of difference is enhanced. 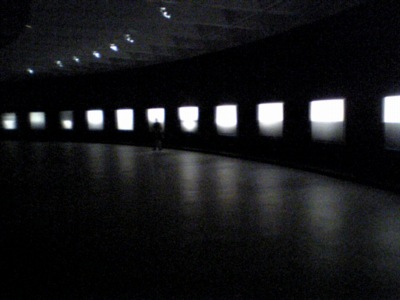 Back to the stunning, though. Sugimoto’s recent forays into architecture and spatial design are (coincidentally?) timed with a waning–or an impending extinction, to hear him talk about it–of photography as a medium for him. The recent discontinuation of his favored materials and the ascendance of digital photography are rendering him obsolete. Not wanting to go the Sally Mann route by adding another layer of meaning onto his work by choosing to homebrew his materials, Sugimoto said he’s just printing as much as he can while he can, and is looking to other mediums for his work.
The result, oddly enough: giant prints. While some of his newest work, wax figure portrait photos and those mathematical model images, were always larger-than-life-size, with this show, Sugimoto has gone back and printed older work in seductive, giant formats. There are museum dioramas, a movie theater, and, stunningly, seascapes. These giant prints are really objects now, not images; conceptually, maybe that’s always been the case, but it’s certainly a much clearer assertion of that idea than Sugimoto’s ever made. This is doubly true for the dramatically lit Seascapes in the massive, blackout gallery [the museum removed some non-loadbearing walls, and they should never put them back; this is probably the most breathtakingly sublime space the Hirshhorn has ever had.]
But I’m not sure that’s entirely a compliment. Large prints are the new market hotness, and since his most popular works, the seascapes, had long ago sold out their editions, there was little opportunity for the artist to be rewarded for his pioneering work. Now, though, he gets a piece of the action himself, and new collectors get the impressive Sugimoto-brand wall candy they crave; it’s win-win. I guess.
But then I have to look back and wonder; it wasn’t “development” who tore down the movie palaces in Sugimoto’s now-deeply nostalgic photos; it was developers. At one point, his work was not only beautiful, it was marginalized, radical, even, as well as conceptually rigorous. And now, well, this show just arrived from the Mori Art Museum at Roppongi Hills, and you can’t get any more “developer” than that. [And I say that as someone counting developers among my family and close friends. But still.]
Of all people, I’m stoked when artists have the freedom to pursue their vision, and I wouldn’t want to stick Sugimoto in the twee realm of master photographic craftsman if his interests lie elsewhere. But at the same time, when I am instantly blown away by beauty in art, I have to admit, I’m a bit skeptical.
I took an old catalogue for him to sign (Sugimoto’s actually doing a signing and a speech this evening, starting at 6, but we can’t make it), and he graciously dashed off a dramatic “S” and some illegible stuff with a silver pen. When I got home, though, I compared it to a catalogue he’d signed for me eight years ago; it was sober, meticulous cursive, as if he were signing a will, not an autograph. And somehow that seems to make sense.

Hiroshi Sugimoto at the Hirshhorn
Previously: greg.org on sugimoto