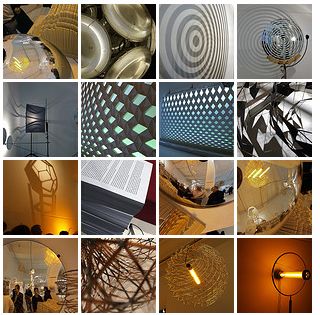 It’s funny, I’ve never really found the worlds of art and flickr to have that much overlap. Just look at the number of photos posted after the Maker Faire 2006 [4,055] compared to those posted after, say, Art Basel [295].
But it turns out some artists have a fairly deep presence on flickr–and by some artists, I mean Olafur Eliasson. There are over 600 photos referencing Olafur in either the tags or the text. [At Tropolism, Olafur posse member Chad posted about a particularly sweet photoset [above] from republish.org, which was taken at an opening last week in Berlin at Galery Aedes.]
[An aside on the one-name thing: people drop single last names all the time in the art world, “Oh, I have some Gursky, some Richter, Demand…” But there are a few artists who get the first-name treatment–Maurizio, Olafur, and Felix come to mind–and it’s funny how different the implications of intimacy make it sound. Whether it’s actually there or not, there’s a hint of friendship/confidance, like saying ‘Marty’ instead of ‘Scorsese’ or babbling about Bob at Sundance. This can obviously be both good and embarassingly tacky.] 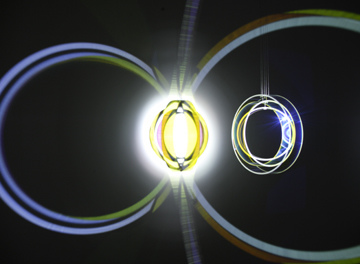 Anyway, it makes a certain sense that Olafur’s work turns up as frequently as it does. First, it’s pretty sexy, and it looks hard to take a bad picture of it. Second, the elements of spectacle he explores make people want to take pictures of it. But most importantly, I think, is the self-conscious experiential nature of the work itself: it is art about the experience of perceiving and seeing, not just art, but everything. And that’s the sweet confluence with flickr, a site where people who pay attention to seeing–and photographing–the world as they experience it meet and mingle.

Taken even further, you could look at how Eliasson’s own taxonomy/typology/experiential photography resonates with the tag-friendly world of flickr, as if flickr-ites’ collective efforts are generating their own Eliasson-style photogrids of Icelandic landscapes, or waterfalls or geodesic domes. I love this one, for example, “F— Off, Olafur Eliasson,” [left] with the caption, “I was taking snaps of Icelandic Lighthouses long before that twat,” which both hits and totally misses the point. [There are tools now for creating photogrids from flickr images, pal, so have at it.]
Olafur himself seems to be adapting his work to account for this collective/collaborative element, and not just by making less photographic work [although that does seem to be the case, which bugs, because I still want me some, and it’s getting harder and more expensive to come by]. At least three times, including in the 2004 The cubic structural evolution project , [on flickr here, of course] and his work in the 2005 Tirana Biennial, the artist put hundreds of pounds of white Lego blocks into the hands of the audience, who built utopian fantasy cityscapes with them.
With flickr, then, it’s Olafur Eliasson’s world; we just live in it. And vice versa.
Olafur Eliasson: Mediating Space – A Laboratory runs through July 20 at Aedes am Pfefferberg, Christinenstr.18/19, 10119 Berlin.