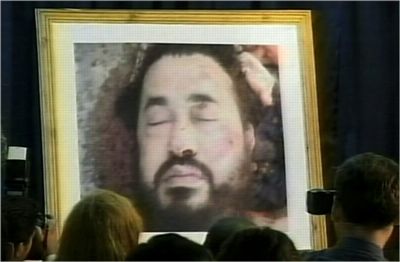 Wow, if there was any doubt about where the contemporary art market is going, they were dispelled this morning at Christie’s Baghdad, where the US Government paid a record-setting $286 billion–plus $240 for framing–for this portrait of the dead Jordanian terrorist Abu Musab al-Zarqawi. [Note: Sale price also does not include KBR’s premium of 17.5% on the first $200 billion and 10% thereafter or the 2,485 US soldiers killed as of press time.]

Congratulations, even though it’s gotta suck a little bit; the Administration had been offered the portrait multiple times in 2002 at much lower cost [estimated in the low eight figures], but turned it down. Of course, at the time, the market was more interested in Al Qaeda portraits, and Zarqawi was not connected to Al Qaeda. [thanks to matt for the pic]