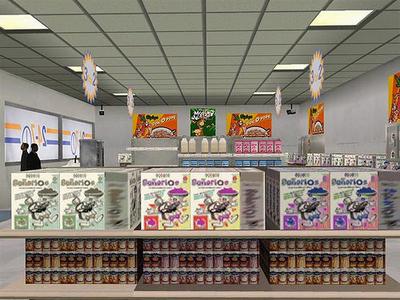 We’re beyond Machinima, people. Some titles have photography as part of the gameplay, and some players are tweaking the games themselves to take in-game photographs.
The results are finding their way onto flickr, like Gregory Perez’s homage [top] to Andreas Gursky’s 99 Cent Store [above], which he shot inside “Grand Theft Auto 4: San Andreas”.
Check out the out-of-focus foreground in this shot by Daniel Kuhne from inside SWAT4. Same focal length effect here, too, in Perez’s shot of a plane.
Marco Cadioli “reports from the war online,” covering battles in MMORPG’s. Some of his black & white photos from “Counter Strike” remind me of stills from Pontecorvo’s The Battle of Algiers. He also “works” as an in-game freelance photojournalist named Marco Manray in Second Life.
There’s even a book coming out, Gamescenes: Art In The Age Of Video Games which includes in-game photography and other artistic and journalistic repurposings.
[via wonderland, where a whole bunch of links are accreting in the comments]